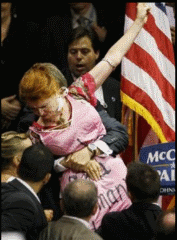 Update | 9-6 6:50 AM EDT: Booker Rising Blogger Stands By His Statement

I informed Shay Riley of Booker Rising of the statement by Ms. Russo of MSNBC, immediately below. Here is his response [emphasis added]:

Update | 9-5 2:56 PM EDT: Responding to my inquiry, Alana Russo of MSNBC has stated it's "completely, totally untrue" that the credentials had originated from MSNBC. In a subsequent message Ms. Russo indicated she did not know whether the credentials used by the protesters had been scanned to determine their origin.

Did the Code Pink members who interrupted John McCain's speech last night use MSNBC press badges to get into the hall?  Not according to Code Pink itself, which claims the two women "obtained passes to the convention from disaffected Republicans."

There is another, much more intriguing, explanation out there.  According to Shay at Booker Rising, which describes itself a newsite for black moderates and black conservatives [emphasis added]:

I took the shuttle bus back to Minneapolis, and I overheard a convention organizer named Phil telling a convention delegate that the protesters on Wednesday night got through because of media credentials that were traced back to MSNBC (he told her that each credential has an individual bar code for each convention invitee). They suspect MSNBC this time as well.

If indeed the badges are bar-coded, it should be a simple matter to check those in the possession of the protesters and determine their provenance.

In the meantime, will the MSM—starting with MSNBC itself—try to get to the bottom of the story?

Note: Gateway Pundit reporting one of the Code Pink protestors might have stolen an alternate delegate's identity to get into the convention. But update at Gateway says delegate claims she attended convention every night--so how could her badge have been used by Code Pink?

Update: Video of Code Pink leader saying they got credentials from somebody who wasn't returning to convention.