Is there nothing—nothing?—that the MSM won't try to spin against Sarah Palin?  They've turned the matter of her Down syndrome son into a suggestion she will neglect her child.  Twisted the news of her daughter's pregnancy into a "damaging revelation" that will cause her image to "suffer." Now, in perhaps the most acrobatic stunt yet, Andrea Mitchell has suggested that the intensity of Palin's popularity . . . could be a bad thing.

Mitchell's theme-o'-the-day, as announced at the top of her 1 PM MSNBC hour, was that there was something flawed in the process by which Palin was vetted.  She repeatedly hammered at the issue with her guest, Republican Sen. John Thune of South Dakota.  Of course, suggesting that the vetting of Palin was inadequate is to imply that she was a poor pick.  Voters will ultimately be the judge of that, but the initial evidence—as gauged by that outpouring of GOP enthusiasm [and dollars]—and by the very virulence of the MSM/Dem counterattack, suggests Sarah will prove to be a big plus for the ticket. It was when Mitchell wondered what would have happened if McCain had "gone with his heart" and picked Joe Lieberman that the matter of the intensity of Palin's popularity arose.

JOHN THUNE: I have tremendous regard for Joe Lieberman.  I serve with him on the Armed Services Committee. A great many attributes that I think would serve Senator Mccain extremely well. But I think Senator McCain made the right choice. He made the right choice for the folks who are going to be on the convention floor here and I think for Republicans around the country, and for swing voters.  I think there are a lot of people out there who like the youth, like the fact that this is historic in terms of the first woman on a Republican ticket, and I think are excited about this pick. And the one thing that we need going into the fall campaign, which have had a little bit of a deficit on, is enthusiasm and intensity. And there's tremendous intensity behind this pick. And for that reason I think it was the right pick.  If you want to get Republican voters to turn out in the fall you got to have that intensity, and Governor Palin certainly has created that among Republicans not only here but I think across the country.

MITCHELL: Can you have too much intensity?  Is there the possibility that there's just too much stuff out there, too much talk, that it's too complicated for people to think of her as a potential Commander-in-Chief?

Perhaps—if the Andrea Mitchells of the media world have anything to say about it.  In the meantime, Andrea can bask in the glory of her Reverse Alchemy Award: turning the gold of Palin's popularity into lead.

Hat tip reader Jeremy W.  Have a look at the screencap of Thune from his appearance, and note the graphic: "favored by right-wing evangelical voters."  When's the last time, do you imagine, that when a Dem senator appeared, MSNBC's graphic read "favored by left-wing secular voters"? 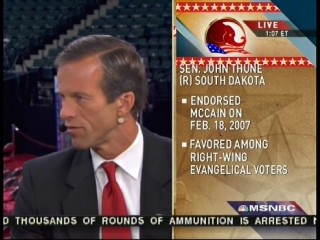