It's 10 AM. A Phone Is Ringing. And Obama Has to Apologize for 'Hair Trigger' Response 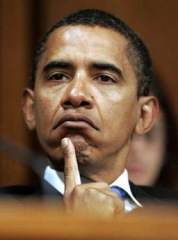 It was more like 10 AM than 3 AM. Somewhere, a phone was ringing, to announce the news that John McCain had selected Sarah Palin as his running mate. And the immediate response of Barack Obama's operation was intemperate and inappropriate. Obama found himself apologizing, calling the reaction "hair trigger." He and Biden subsequently made the more gracious kind of comment that should have been offered in the first place. Senators get to "revise and extend" their remarks when they've said something dumb on the floor. That's not always the case for presidents. A "hair trigger" reaction to a real crisis could have disastrous consequences.

Today, John McCain put the former mayor of a town of 9,000 with zero foreign policy experience a heartbeat away from the presidency. Governor Palin shares John McCain's commitment to overturning Roe v. Wade, the agenda of Big Oil and continuing George Bush's failed economic policies -- that's not the change we need, it's just more of the same

Compare and contrast with the gracious, statesmanlike ad McCain aired on the day of Obama's acceptance speech. Obama eventually realized that his campaign's intemperate reaction was out of line. According to the AP, Obama "blamed the mixed messages about McCain's choice, Alaska Gov. Sarah Palin, on campaign aides with a "hair trigger."

If John McCain wants to have a debate about who has the temperament and judgment to serve as the next commander-in-chief, that's a debate I'm ready to have.

Will the MSM point out that the very next day, the temperament the Obama operation displayed was a hair-trigger one?

Note: this item was originally posted at Free Republic while the NB site was down.