NBC's Savidge: 'Isn't Obama a Bit of a Liar' on Oil Money? 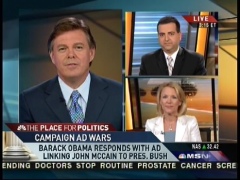 Joe Scarborough has estimated that 95% of the elite media will pull the lever for Barack Obama.  Even so, evidence continues to mount that the MSM is beginning to view the Dem candidate with a more discerning eye.  The latest example comes from an unexpected corner, that occupied by NBC correspondent Martin Savidge.  As NewsBusters has reported, on everything from climate change to Jesse Helms to the Jena Six, Savidge has consistently toed the liberal media line.

But on MSNBC this afternoon, interviewing an Obama supporter, Savidge surprisingly suggested that Obama was "a bit of a liar" on the subject of oil industry donations that he and John McCain have accepted.

Obama backer Chris Kofinis and McCain supporter Sherri Jacobus were Savidge's guests.  Among the topics at hand were an Obama ad that accuses McCain of being in the pocket of big oil [view ad here].   The voice-over intones:

Every time you fill your tank, the oil companies fill their pockets. Now Big Oil’s filling John McCain’s campaign with two million dollars in contributions. Because instead of taxing their windfall profits to help drivers, McCain wants to give them another four billion in tax breaks.

But as FactCheck.org has detailed, not only does the ad overstate the amount of money McCain has received [it's closer to $1.3 million], it ignores the fact that Obama has accepted hundreds of thousands of dollars of oil-industry money himself. That led to this exchange.

Maybe not, but as Kofinis surely knows, neither does McCain take a dime from "oil companies." It's a federal crime for corporations to donate to presidential candidates.  Obama and McCain both accept contributions from oil company executives.  And as FactCheck established, McCain's taken about $1.3 million while Obama's haul is just shy of $400,000.  Hardly a difference for Obama to get huffy about.  Stand by, though, Mr. Savidge, for what is likely to be a gusher of criticism from the Obama-friendly end of the blogosphere.

Note: this isn't the first time Obama has played fast and loose with the facts on taking oil money.  From a Howard Kurtz blog item during the Dem primaries [emphasis added]:

In a new ad airing in Pennsylvania, Barack Obama uses a gas-station backdrop to declare: "Exxon's making $40 billion a year and we're paying $3.50 for gas. I'm Barack Obama and I don't take money from oil companies or lobbyists and I won't let them block change anymore."

This drew an e-mail blast from Hillary Clinton's team, which accused him of "false advertising." Clinton aides said Obama's presidential campaign has received more than $160,000 from oil and gas companies -- including $8,400 from Exxon and $12,370 from Chevron just last month. And two oil-company chief executives have acted as Obama fundraisers.