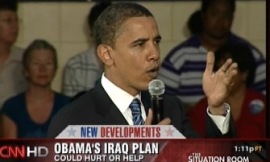 A couple days ago at the gym, listening to a Hugh Hewitt podcast and perhaps not paying as much attention as I should have while pedaling away, I heard Hugh mention that Barack Obama doesn't understand the role of the Joint Chiefs of Staff. What was Hugh referring to? As the British would say: the penny just dropped.  A few minutes ago, CNN's Situation Room played a clip of Obama saying this about his plan for Iraq:

BARACK OBAMA: I'm going to call in the Joint Chiefs of Staff, and give them a new mission, and that is to bring the war in Iraq to a close.  We are going to get out.

There's only one problem.  The Joint Chiefs of Staff does not have operational command of U.S. military forces.  That authority resides in the commanders of the various Unified Combatant Commands.  CENTCOM is the command with responsibility for Iraq [and 26 other countries including Afghanistan and Pakistan].  Earlier this month, the Senate confirmed Pres. Bush's appointment of Gen. David Petraeus as CENTCOM commander.  Lt. Gen. Raymond Odierno is the new US commander for Iraq, replacing Gen. Petraeus. Those are the people, along with the Secretary of Defense, to whom the orders Obama spoke of would be issued.

Dean Barnett, Hugh's former colleague, now a Weekly Standard contributor, has written about the chain of command and Obama's gaffe in detail: Obama Ignorance Watch: What Do the Joint Chiefs Really Do?

During the segment I saw, CNN never noted this troubling lack of knowledge on the part of the man who would be Commander-in-Chief.  Will any other MSM outlets call attention to it?
Foreign Policy Iraq Campaigns & Elections 2008 Presidential Military The Situation Room Weekly Standard Video Dean Barnett Hugh Hewitt Raymond Odierno David Petraeus