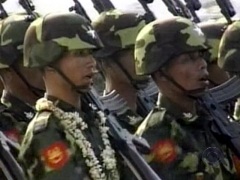 Again today, the New York Times demonstrates that the MSM isn't opposed to America's invasion of foreign countries. There's really only one precondition: the national security interests of the United States must not be at stake.

Thus it is that the NYT op-ed page today runs Aid at the Point of a Gun by Robert D. Kaplan, a national correspondent for The Atlantic and a fellow at the Center for a New American Security. The gist is that while it could bring ongoing obligations, the armed invasion of Myanmar for purposes of bringing aid to the cyclone victims is justifiable and feasible. Extended excerpt [emphasis added]:

As it happens, American armed forces are now gathered in large numbers in Thailand for the annual multinational military exercise known as Cobra Gold. This means that Navy warships could pass from the Gulf of Thailand through the Strait of Malacca and north up the Bay of Bengal to the Irrawaddy Delta. It was a similar circumstance that had allowed for Navy intervention after the Indian Ocean tsunami of December 2004.

Because oceans are vast and even warships travel comparatively slowly, one should not underestimate the advantage that fate has once again handed us. For example, a carrier strike group, or even a smaller Marine-dominated expeditionary strike group headed by an amphibious ship, could get close to shore and ferry troops and supplies to the most devastated areas on land.

The magic of this is that an enormous amount of assistance can be provided while maintaining a small footprint on shore, greatly reducing the chances of a clash with the Burmese armed forces while nevertheless dealing a hard political blow to the junta. Concomitantly, drops can be made from directly overhead by the Air Force without the need to militarily occupy any Burmese airports.

In other words, this is militarily doable.

Ever think you'd read a columnist writing in the NYT of "the magic" of a military invasion?

I've saved the best for last:

Of course, the approval of the United Nations Security Council would be best, but China — the junta’s best friend — would likely veto it.

So not only is that "magic" invasion "doable," we shouldn't let the absence of UN approval stand in our way!

Just in case people might imagine that, though the Times ran the column, it opposes its argument, check out this editorial which also appears today. Though not as forceful as Kaplan's call for consideration of invasion, it includes this paragraph [emphasis added]:

There is a growing debate about whether this obstruction amounts to a crime against humanity, one that requires the United Nations to forcibly deliver relief supplies under its “responsibility to protect” principle. The European Union’s foreign policy chief, Javier Solana, has suggested the United Nations use “all means” to help the victims. How that would happen is unclear.