Is This The Sound of Pro-Choice Conceding Defeat? 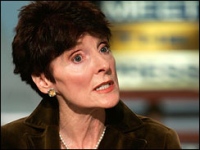 What if pro-choicers wrote a column filled with well-articulated pro-life arguments . . . and never mustered a substantive response? Would it suggest they have effectively conceded defeat on one of the great moral issues of the day?

That "what if" becomes reality in Abortion's battle of messages in today's LA Times. As noteworthy as the column's substance is the identity of one of the co-authors: none other than leading pro-choice light Kate Michelman, past president of NARAL [and current John Edwards advisor].

Consider these excerpts, which with minor editing could just as easily have come from a Bill Buckley column.
How do the authors go about refuting the litany of weighty pro-life arguments they present? Cue the cricket chirps. Rather than presenting a single substantive argument in defense of their position, they make a hand-wringing call for process:

If pro-choice values are to regain the moral high ground, genuine discussion about these challenges needs to take place within the movement. It is inadequate to try to message our way out of this problem. Our vigorous defense of the right to choose needs to be accompanied by greater openness regarding the real conflict between life and choice, between rights and responsibility. It is time for a serious reassessment of how to think about abortion in a world that is radically changed from 1973.

Not a substantive word about how the pro-choice movement could regain that moral high ground ceded to the pro-life movement.

What's the sound of a white flag waving? Will the MSM cover what might be a tectonic shift in the moral landscape? And how about a probing question on abortion from CNN at the Dem debate on January 31st?