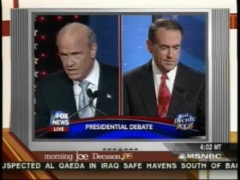 See updates for Huckabee, Thompson responses to this story at bottom.

Scratch Joe Scarborough from the list of those praising the performance of Fred Thompson at last night's South Carolina debate hosted by Fox News. With panelists Willie Geist and Mika Brzezinski in supporting roles, the Morning Joe host went off on Thompson today with stunning vitriol, deriding him as "Freddie boy" "pathetic," a "lapdog" and a "hatchet man" for John McCain.

JOE SCARBOROUGH: Last night it was so painfully obvious that Fred Thompson went to John McCain yesterday morning [affecting deep Thompsonesque voice] "if I can stay awake through this debate, I'll attack Huckabee for you."

SCARBOROUGH: That's exactly what he's doing. So now Thompson, this is the most, it's just easy to read. Thompson is now beating up Mike Huckabee for John McCain.

GEIST: He chooses now to wake out of his slumber. All of a sudden he's energetic, he's all over Mike Huckabee.

BRZEZINSKI: Oh. He's awake? I want to see him awake. 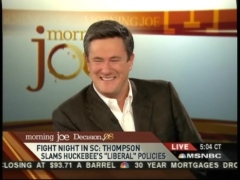 SCARBOROUGH: You know what's so great about that speech that Fred Thompson just gave? It was written by the same guy that wrote John McCain's horrid speech after New Hampshire.

BRZEZINSKI: Oh my goodness, and he was reading it better than McCain was.

SCARBOROUGH: Yeah, he can read a little better than McCain because he's an actor.

[Shouting to camera] Hey Fred! Hey Fred! If you're gonna act. If you're gonna be a hatchet man for John McCain, come on buddy, you gotta be a little less obvious about it. And you know what's going to happen? They're just going to help Mike Huckabee

SCARBOROUGH: Can you believe? That's so sad. That really is pathetic, that John McCain and Fred Thompson have been reduced to this, that they read a diatribe like that.

After a review of the latest polls, showing McCain leading by as many as nine points over Huckabee, Scarborough resumed his scalding.

SCARBOROUGH: McCain and Huckabee. Then they go to Florida, and they're going to be in Michigan first. We'll see if Freddie boy is still the lapdog.

GEIST: You know it's funny, he got a lot of points last night from the pundits after the debate, Fred Thompson, what a great debate he had, he came to life, he had energy. But as you point out, the motive might have been a little bit different than winning the nomination himself.

GEIST [with a certain dubiousness]: A hatchet man.

Huckabee is scheduled to be a Morning Joe guest later in the show. We'll see what he has to say. Look for Joe under, not on, the Straight Talk Express. 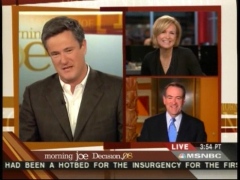 Huckabee, appearing just before 7 AM ET, went scatalogical in responding to Thompson.

JOE SCARBOROUGH: Last night, now tell me what was happening. It certainly looked like Fred Thompson was doing John McCain's bidding. You know Fred, I love him, I served with him up in Congress, but he's been asleep for the last couple months. He woke up last night, and he had a hatchet, and he used it all over your head now. What's going on here?

MIKE HUCKABEE: That he did.

HUCKABEE: Well, I think Fred needs some Metamucil. I think it would help a lot if he gets some. You know, he was in a bad mood last night.

BRZEZINSKI: Did he just say that?

HUCKABEE: But the truth is he's going to have to hope that this writers' guild strike ends soon. He needs some new lines, and he needs to get some good research. Because when he was out there calling me things like a liberal, of all the things I've been called that's a laughable line, that's gotta be one of the great ones.