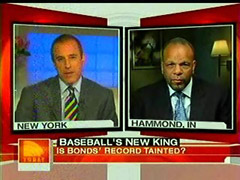 When New-York based "Today" went looking for a local sports reporter to defend Barry Bonds the morning after he set the career home run record, it didn't turn to the New York Post, whose headline this morning reads JUNK BONDS: ‘SULTAN OF SYRINGE'. Nor was it likely that the designated hitter would be someone from the Daily News, whose back page screams "King of Shame." Instead, "Today" looked to the New York Times, and in particular to sports writer William Rhoden [pictured here with Matt Lauer], to embrace Bonds.

'TODAY' CO-ANCHOR MATT LAUER: You've been very critical of baseball actually leading up to this milestone for the way they've been wringing their hands trying to figure out what to do with this record. Barry Bonds you wrote, quote, "he will be baseball's king, it's emperor, it's czar." How are you feeling this morning?

NYT SPORTS REPORTER WILLIAM RHODEN: I think it's a great moment, Matt. It really is. It's an historic moment. The number's there, no matter. There's going to continue to be hand-wringing, but there's no hand-wringing in the Bonds household [proving what?] . . . It's just a tremendous accomplishment . . . I don't think anyone doubts that. 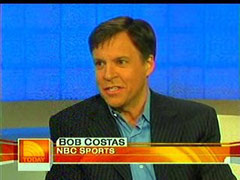 Fortunately, sports commentator Bob Costas was there to provide balance. In a July episode of his HBO show, Costas' guests were Red Sox pitcher Curt Schilling and chemist Patrick Arnold, both of whom expressed the opinion, in which Costas joined, that Bonds had taken steroids. Bonds replied by calling the 5' 6" Costas a "little midget man who knows (nothing) about baseball."

LAUER: You have bristled at the idea he is innocent until proven guilty.

SPORTS COMMENTATOR BOB COSTAS: This "innocent until proven guilty" is an insufferable platitude that is masquerading as high-mindedness, as if those of us who don't withhold all judgment need a remedial course in civics. First of all, this isn't a criminal case. We're not talking about depriving him of his liberty, or for that matter his livelihood. But if for the sake of argument it were a criminal case, you would have more than enough evidence not only to establish that he used performance-enhancing drugs, but to establish that he used them in copious amounts and that he wasn't just assisted but transformed as a player as a result. And you would prove that beyond any reasonable doubt. 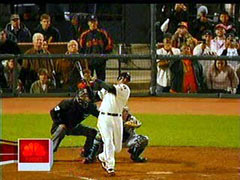 Lauer then brought another Times reporter off the bench to bolster Rhoden, reading from an article today by NYT reporter George Vecsey, who wrote: "Nobody, and certainly not some chemist in a white smock -- swung the bat for Bonds against objects moving 80 or 90 or 100 miles an hour. He had to do that himself, with the superb reflexes he had as a cocky stripling, and the craft he acquired as a smug and enlarged elder."

This is perhaps the most specious argument that has been regularly trotted out in Bonds' defense. Of course steroids don't swing the bat. But they permit the user to swing it harder, turning doubles into home runs. And Vecsey's comment begs the question: just how did Bonds become "enlarged"?

Rhoden never addressed the steroid allegations per se, offering this blanket defense, or better yet, pulling the blanket over his head.

RHODEN: Oh no, he, Matt, he's a great home-run hitter. Period. The end.

The end of what? Rhoden's credibility?