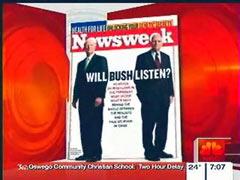 The Iraq Study Group's recommendations are about to be released. Think about it: what should be the media's focus? I'd say attention should center on what those recommendations are, and whether if implemented they would advance - or impair - US interests in Iraq.

But that's not the MSM's focus at all. From the cover of Newsweek to the Today show, the concern is not whether the recommendations are good, but only whether President Bush will accept them. 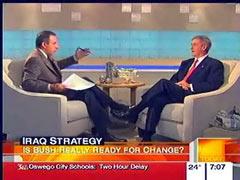 and his decision-making progress, Lauer impatiently cut him short:

"But it's clear that there's got to be a change of course and there are a lot of people weighing in with advice on how that course should be changed. Does he listen?"

Change for change's sake? Is that any way to run a war?

Finkelstein recently returned from Iraq. Contact him at mark@gunhill.net