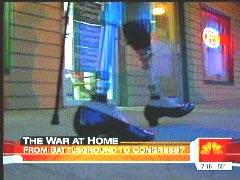 OK, Matt didn't quite say that as 'Today' kicked off its 'The War at Home' three-part series this morning on the lives of American veterans once they return home from war. But judging from the opening episode and the tease for what's to come tomorrow, he might just as well. NBC is clearly doing its part to tend the Dems' Victory Garden.

Of all the reporters in the NBC News stable, 'Today' tapped for this segment Jonathan Alter, a regular guest on Al Franken's Air America show and a consistently liberal columnist at Newsweek. And of all the hundreds of thousands of veterans, Today just happened to choose Tammy Duckworth, who lost both legs while co-piloting a Black Hawk helicopter in Iraq, and who now just happens to be . . . running for Congress as a - give me a sec here, OK, got it - Democrat. 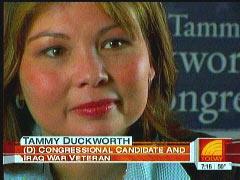 After Today aired footage of Duckworth's prosthetic legs, shown here, which Alter praised as 'rather flashy,' Duckworth recounted to Alter the story of how she worked to land her helicopter despite her horrific injuries, tearing up as she said "I did my job, or tried to, until I passed out. I was trying to push the pedals, I was trying to fly with my arm, which was basically hanging by some skin."

Alter acknowledged the obvious, that for Duckworth's Republican opponent in Illinois' 6th CD, Peter Roskam, "it can't be easy running against a war hero." Roskam was shown making the cogent point that while he admires her service and sacrifice, "part of admiring someone, part of respecting them, is not patronizing them," meaning Roskam reserves the right to criticize Duckworth's stand on issues on which they differ such as immigration.

As this segment ended, Matt made clear that Today's battle for a liberal majority continues: "Tomorrow, how one family is coping with a devastating battle injury."

It was once said of Churchill that he "marshaled the English language and sent it off to war." Today is seeking to do the same with the airwaves, in the Great War to Make Pelosi Speaker.