Jolie: Spend 'Whatever It Takes' to Extend 'No Child Left Behind' to Entire World 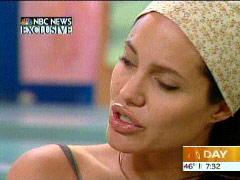 You can't say Angelina Jolie doesn't think big - with your tax dollars. In an interview aired on this morning's Today show, Jolie advocated applying the No Child Left Behind Program . . . to every child in the world, courtesy the American taxpayer.

Ann Curry, Today newsreader and NBC Dateline host, had interviewed Jolie during her recent trip to Africa to promote education. At one point, Curry made this somewhat surprising observation to the Hollywood star:

"There is another very famous person who talks about education. And you sound a lot like her: Laura Bush."

Jolie engaged in a, no pun intended, pregnant pause and a nervous chuckle. You could hear the gears grinding as she seemingly asked herself 'just how political can I get here?'

Curry nudged her: "Actually, she talks a lot about this issue, specifically educating girls."

Jolie: "She should nudge her husband."

Continued Curry in a surprising bit of fairness to the administration: "And I think it also could be said that the US does spend a considerable amount of money helping poor people get educated. So what's your message?"

That's when Jolie went global: "No child left behind means no child left behind. And that isn't [just] with what we feel we can give right now, but with whatever it takes. Britain gives three times more than us right now. They are not richer than us. So I don't know what the great excuse is."

Back in the studio, Katie, Matt and Al had to restrain themselves from breaking into worshipful applause at Jolie's performance. Amidst expressing extensive concern about the intrusions of paparazzi , the crew offered up these nuggets of praise:

A lot of us might be nervous wrecks - if Jolie and her friends ever got hold of Congress and the White House!

Finkelstein lives in the liberal haven of Ithaca, NY, where he hosts the award-winning public access TV show 'Right Angle'.  Contact him at mark@gunhill.net