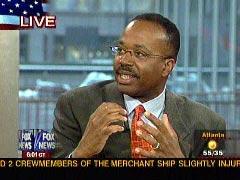 A 'tension convention' - that's how Don Imus would have described the ill-concealed ill will on this morning's Fox & Friends Weekend between Juliet Huddy and Julian Phillips.

Huddy, a former host of the show making a guest-hosting appearance, wasted no time in setting the confrontational tone. In her opening comments, Juliet congratulated host Gretchen Carlson on "doing a fantastic job" then pointed to Phillips saying "and Julian, you're doing a . . . " as her voice trailed off in a sarcastic riff.

"I decided to come back to harrass you," Huddy continued, as Phillips replied "I'm looking forward to getting into a fight." Carlson, evidently aware of the prevailing state of hostilities observed "I'm sure we're going to get into something between the two of you."

It was later in the opening coffee klatsch, when talk turned to the Natalee Holloway case, that Julian threw gasoline on the racial fire. Discussion centered on new allegations by the Aruban Deputy Chief of Police that Natalee died as the result of an overdose of alcohol and drugs. Huddy and Carlson were clearly offended by this blame-the-victim theory. Carlson went so far as to call the investigator's allegation that Holloway had drugs in her possession 'blasphemous' [presumably meaning to say 'slanderous'], and Huddy sardonically observed "I hope [the deputy chief] has a way to back all that up."

Far from being offended by the allegations, Phillips was happy to offer up a theory consistent with them: "could it possibly mean that she was so impaired that she might have drowned or something? That certainly has been a theory out there."

And while Phillips blithely proclaimed that "you don't want to see anybody die," it was clear that he was less concerned for Holloway's fate than he is for what he sees as the perceived mistreatment . . . of Aruba. "My whole problem with this case is that it's kind of held an entire country hostage." Your 'whole problem,' Julian?

Phillips wasn't appeased when Carlson replied that Arubans should be angry "at the fact their government has no clue what the heck they're doing in this case." He shot back: "We have thousands of missing people in this country. Does anybody hold the United States hostage?"

When Huddy argued that much of the continued focus on the case is due to the relentless efforts of Natalee's mother to keep the story in the news, Phillips' argument took an even more sharply-defined racial turn. He replied: "there are other people who have been relentless. There's a case here in New York where a Hunter College student was missing and the mother was relentless and no one paid any attention to her."

Here's a NY Daily News story on the Moore case.

With his "no one paid any attention to her" comment, Phillips clearly took at face value the explosive claims of the mother, who is seeking more than $1 million in damages.