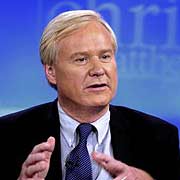 Did you know that the US is still at war with Korea, Germany, Japan, Bosnia and Kosovo? Based on “Hardball” host Chris Matthews' recent claims, we are still at war with those countries and will be until our troops leave their soil. (h/t Weasel Zippers)

On his November 28 show (transcript here), MSNBC's Matthews discussed Iraq with Washington Post columnist David Ignatius, wondering when “will we be able to come home.” In the process, the former Carter speechwriter said, “If we can't ever come home, we can't ever say we won.”

Silly me, I thought WWII, the Korean War, the Bosnian War and the Kosovo War were over. I guess the US troops still stationed in those countries prove otherwise (bold mine throughout):

...But my definition of a defeat is you can‘t leave. If we can‘t leave that country in the foreseeable future, we are losing. The purpose of the American Army is to get home and be ready to defend this country against possible threats to this country.

As long as we‘re stuck over there, it seems we‘re losing. When will we be able to come home from Iraq, based upon all this popular good news here?

I understand what Matthews is trying to say, but it isn't that cut and dry. For many reasons, the winning side frequently retains troops in the country where the war was waged—rebuilding, maintaining order, training the defeated and ensuring that others do not invade. Iraq wouldn't be the first country where military forces remain in country after the war is over. Surely Matthews knows that.

I wager that Matthews “definition of defeat” is a little different than most military historians'. Requiring American troops to leave the battleground country to declare a victory would mean that we didn't win WWII. We still have troops in Germany and Okinawa.

Now, obviously, he didn't mean that WWII isn't over, but it's fun to apply his claims about the Iraq War to other conflicts.

Parsing words, he could have meant the type of situation where US troops “can't leave” a country because they are keeping a more active peace, such as the ones on the DMZ in South Korea. That is a little different from troops remaining in a country for strategic reasons, such as those stationed at bases in Europe.

Even going by the more narrow interpretation, according to Matthews' new definition, we are still at war with North Korea, Bosnia and Kosovo.

If a conservative had said this, fellow MSNBCer Keith Olbermann would make him or her the “Worst Person in the World” for changing all of those WWII vets from winners into losers. If Olbermann can tear himself away from the self-tanner, I'm sure he'll get right on it.