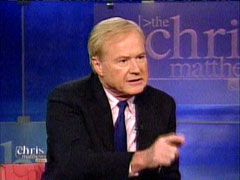 On his syndicated "Chris Matthews Show" on Sunday, Chris Matthews discussed President-elect Barack Obama's ability to enact his campaign agenda as well as the state of the Republican Party with a panel of other newsmakers, including Erin Burnett of CNBC and Michele Norris of NPR. Matthews excitedly declared that "the American people voted for change, they voted for Obama" and hopefully wondered if the President-elect would "come in with loud music" and "do big stuff on infrastructure, on stimulus, on getting the economy going."

Matthews also deemed Obama's administration, which hasn't taken office yet, as "historically wondrous" and pondered who would become the "chief jeer leader" of the new administration and "dump on the parade every day":

There's a row open right now, it's the chief jeer leader. When a new administration takes office, no matter how historically wondrous it is, like Barack Obama, there's going to be someone out there on the other side who leaps to the chance to be the person who dumps on the parade every day. Is it going to be Sarah Palin?

The "Hardball" host also seemed to agree with USA Today founder Al Neuharth who proclaimed in his November 14 column that Inauguration Day should be moved from January 20 to the first Tuesday in December because "people who elect a new President are eager for the change to take place. The sooner the better."

Matthews, though, took a more serious approach in his argument, claiming that "this lame duck period looks really dangerous right now for us." He chided President Bush for not being there "psychologically" and brought up the change to the Constitution in 1930's which moved Inauguration Day from March up to January 20:

Okay. We have an interregnum here. We have one president not in office yet, one not still there it seems psychologically. You know, they changed the Constitution back in the thirties to have this shorter lame duck period. But now this lame duck period looks really dangerous for us right now because we've got through the holidays all the way to January 20.

He also seemed anxious for Obama to "try to deliver" his campaign promises as he asked his guests if Obama will take "big action on trying to get the country going in terms of infrastructure? He'll do it all relatively quickly?" Matthews also wanted to be assured that Obama's "promises mean something and they'll mean something within a year."

Along with all of the love for Obama, Matthews also poked fun at Republicans. He played a clip from Jay Leno's show which joked that former Republican Vice Presidential nominee Sarah Palin was getting "thousands of calls pleading with her to run" for president in 2012, all from Democrats. Matthews added, "Palin became a late-night punch line this year but Republicans have been the butt of jokes for years. Back in 2002 when George Bush was still popular, they were cartooned on the Simpsons." He then showed the clip from the episode in which a group of Republicans discuss which "unmitigated evil" to tackle: PBS, hippies or the environment. After the clip, Matthews joked that was a "party that only Dick Cheney would like to go to."
2008 Presidential The Chris Matthews Show Obama Watch Sarah Palin