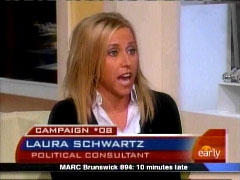 On Friday's CBS "Early Show," Laura Schwartz, a former Clinton administration official and adviser to Teresa Heinz Kerry, wife of former Democratic presidential nominee John Kerry, appeared for a segment on Republican vice presidential nominee Sarah Palin's fashion style and the clothes she wore during her speech at the Republican National Convention. While Scwartz and co-host Harry Smith talked about the popularity of "Palin paraphernalia," they also attached a high price tag to Palin's outfit as well as the outfit and jewelry Cindy McCain wore during her appearance at the Republican convention.

Schwartz also appeared on the Early Show on August 26, the day after Michelle Obama's speech to the Democratic National Convention, to talk about the way the potential First Lady dressed for her speech, but did not put a price tag on it. Instead, Schwartz stated, "I thought she was very simple, very understated last night, which might be a good idea, Harry, because in this era of attack ads, the McCain people are really saying, `Hey, the Obamas are elitist. They're caught up in celebrity.' If she came out in a real fancy dress, that would just be more fodder for them."

When talking about Cindy McCain during the September 19 segment, Schwartz claimed that her dress, watch, pearls, shoes and diamond earrings added up to be more than $300,000. The most expensive item, according to Schwartz, was the diamond earrings which she claimed cost $280,000. Smith seemed flabbergasted by this number while Schwartz claimed, "That kinda puts her over the top. That's like one and a half houses, Harry."

However, this information was taken from a Vanity Fair article which states at the end that "all prices except Cindy's watch are estimates, and the jewelry prices are based on the assumption that the pieces are real."

On Wednesday, September 24, Early Show co-host Russ Mitchell offered a correction of Friday's story: "Now, a correction. Last week, the Early Show aired an segment on an outfit Cindy McCain wore during the Republican National Convention. We estimated the total cost was more than $300,000. It turns out that dress is off-the-rack and the pearl necklace is not real. We regret the error."

The transcript from the September 19 segment follows:

HARRY SMITH: This morning in our trail mix, a grab bag of interesting facts, factoids, little pieces of information you just won't find anywhere else. Political consultant Laura Schwartz is back with us this morning. Good morning.

SMITH: Back in the day we used to say clothes make the man!

SCHWARTZ: And you know what? They make the woman.

SMITH: The clothes make the candidates?

SCHWARTZ: Yes. It was a $2,500 jacket from Saks Fifth Avenue so it's getting a lot of notice this week as the numbers came out. But it went over great. She looks fabulous in it but some people think she maybe she is taking cues from Cindy McCain now. You know, Cindy McCain, her outfit that she wore the opening night of the convention comes in, once you tally everything up, Oscar de la Renta dress for $3,000. The watch from Chanel $4500. $11000 to $25000 worth of pearls. $600 shoes. And the diamond earrings, $280,000. So she clocks in right around $300,000.

SMITH: The earrings, though.

SCHWARTZ: That kinda puts her over the top. That's like 1 ½ houses, Harry.

SCHWARTZ: Mine aren't all real.

SMITH: Here is the thing. Part of this is very interesting because there's this whole viral response, especially the Sarah Palin look. Everybody is on Ebay looking for Palin paraphernalia.

SCHWARTZ: Everything. And you don't have to spend $2500 on a jacket to get her style. Her glasses go for about $400 from Kawasaki. Series 704, color 34 gray. Very popular. Her shoes that she wore for her announcement with John McCain are from Naughty Monkey. They're called the double bear style, it's a red peek-a-boo shoe and that's under a hundred dollars. So there's some other ways to get it. But if you want real Sarah Palin paraphernalia, on Ebay today as of a few moments ago, a piece of toast with Sarah Palin's's face on it is going for $12,000. Yes! Now I hear that that didn't just appear like the Virgin Mary that appears on potato chips. That actually was like emblazoned into it. But yeah if you got 12 grand today, you might want to check it out.

SMITH: I'm not sure I can live without that.

SCHWARTZ: I know you can't.

SMITH: Laura Schwartz, thanks so much.