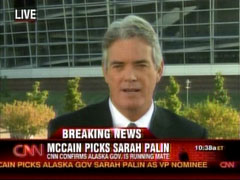 Senator Kay Bailey Hutchinson appeared on CNN's "Newsroom" on Friday to discuss the selection of Governor Sarah Palin as Senator John McCain's vice presidential running. During her interview, "American Morning" co-host John King played a clip of Palin from Glenn Beck's Headline News show from June in which Palin said that she would not accept an offer to be McCain's running mate because she felt she could help Alaska contribute more to America. Roberts then questioned Palin's commitment to her state:

So even back then, you know, speculation wise that she might be chosen as the running mate but she seemed very dedicated to the state of Alaska. The fact that she's leaving it behind after just two years in office, what does that say about her commitment to politics at least on the state level?

However, during his time as Chief White House Correspondent for CBS, Roberts talked up Senator Hillary Clinton as a potential candidate for president in the 2004 election. Roberts filed reports on the possibility of her candidacy on the November 2, 2003, "Evening News" and again on the November 3, 2003, "Early Show," just halfway into her first term as a Senator from New York, and while he did refer to Clinton as "polarizing," he never questioned her commitment to New York:

Her husband, the former president, calls her one of only two stars in the Democratic Party, and for many party loyalists who have watched Republicans take control of the White House and further their gains in the House and Senate, Hillary Clinton is the one person who can save the Democrats.

The senator insists the door is closed to a Clinton candidacy in 2004, yet she continues to act like a potential candidate, last week launching her most pointed attack yet on President Bush's foreign policy.

Even this late in the game, Clinton's well-oiled fund-raising machine could pull together the money needed for a run, and she has the cachet of name recognition, but remains an enormously polarizing figure.

People close to Clinton say she wants to spend the next few years focused on the legislative process in the Senate, getting her negatives down and re-election in 2006. But political watchers believe with George Bush looking vulnerable and new polls showing Clinton more than 30 points ahead of the nearest Democrat, 2004 may be her best shot at the big prize.

The relevant portion of the transcript from the August 29 segment follows:

JOHN ROBERTS: Senator, let's take a moment to listen to the governor herself. She was on the Glenn Beck program back in June. Let's listen to what she has to say here with Glenn and then we'll get you to comment on it.

GLENN BECK: Would you go to that den of vipers in Washington if you were asked?

GOVERNOR SARAH PALIN: You know, if I had to make such a decision today, it would be no. There is a lot that Alaska could be, should be doing to contribute more to the U.S., and I think that I can help do that as governor of the state staying here.

ROBERTS: So even back then, you know, speculation wise that she might be chosen as the running mate but she seemed very dedicated to the state of Alaska. The fact that she's leaving it behind after just two years in office, what does that say about her commitment to politics at least on the state level?