CBS Early Show Gets (Their Only) Speech Analysis from Liberal Blogger 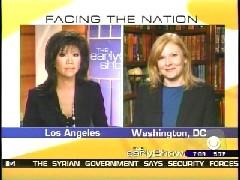 Back in July, Time magazine elevated left-liberal blogger Ana Marie Cox, better known as Wonkette, to Washington editor of their online site, Time.com. Cox, whose background includes stints at Mother Jones and The American Prospect, had built her reputation, and audience, with occasionally witty, constantly snarky and generally profane commentary on the sex lives of Washington residents. But she had an audience, and Time apparently felt that that justified her promotion. So she moved from the fringes of the blogosphere towards the mainstream press.

A major speech from the President. Carried live by all of the networks. And the only analysis that CBS presents its viewers with the following morning is from a liberal blogger, presented to that audience as a non-partisan analyst.

Julie Chen: The white House was trying to say the speech we heard last not was nonpolitical and more reflective. Would you agree?

Ana Marie Cox: I would say it was repetitive, not reflective. He said things like we need to put aside our differences and agree with them. They don't want us to actually have any debate. They want us to get on the same side. That's what they mean by putting aside differences.

Julie Chen: What is the difference between the 17-minute speech we heard the President deliver last night and the one we heard him deliver five years ago right after our nation was attacked?

Ana Marie Cox: It didn't feel very different. I thought he gave a better performance last night, but a lot of the themes were very much the same. And I think the main difference was he did go ahead and talk about Iraq. Obviously he didn't talk about Iraq five years ago, but to put Iraq in the context of the War on Terror and to talk about it on the anniversary of 9/11 I thought was fairly brazen, although he obviously made a distinction between Saddam Hussein and the attacks on the towers and didn't say anything Saddam Hussein had anything to do with those attacks. He was making a very emotional argument for us to stay in Iraq.

Julie Chen: Of course he couldn't not mention the war in Iraq, although five years ago we were not in Iraq yet. But does it seem like the President is trying to connect a dot between the war in Iraq and the War on Terror?

Ana Marie Cox: Clearly they are. I think the Republicans have seen through focus groups and polling that the only was that they can gin up support for the war on Iraq is to remind people of the War on Terror and of 9/11. But I think that's an emotional argument, that's kind of a propagandistic argument and not a policy argument. That's not something that's really going to stick with voters, I don't think. It's a very ephemeral way to argue for support in Iraq.

Julie Chen: We also heard the president draw parallels to World War II. What do you make of that?

Julie Chen: Do you think making that parallel was not appropriate?

Ana Marie Cox: Well, I do think it was inappropriate. I think it's a very different kind of fight we're doing now. This is an unending war. This is a war he's admitted is going to take a long time. It has no definite winning point. There's no point in which you can say we won the War on Terrorism. Is it when all the terrorists are dead? When there's no terrorists left in the world? Unlike in World War II or the American Revolution there were visible goals, things we could define we wanted. I think he's sort of trying to make the American public believe there's an end goal to this when really all of us can agree there isn't something like that.

Yet they get offended when anyone suggests that there might be a slight bias to the left in the mainstream press. Based on the last couple of days, it looks as though they aren't even trying to pretend anymore...

The "analysis" runs just under 3 minutes and can be seen here.