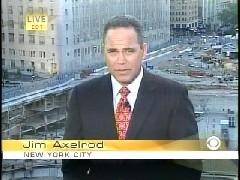 The 5th anniversary of the terrorist attacks on September 11th, 2001, is clearly an event that needs to be marked and acknowledged. One can only imagine the furor that would arise if the President of the United States were to neglect observing and commenting on the day. On the other hand, if he were to choose this particular time to come out with partisan political attacks, to attempt to take advantage of the anniversary observances in purely political ways, I believe we can say, with some confidence, that the mainstream press would be vociferous in their condemnation. History suggests to us that the media in this country is on the lookout for any signs of partisanship from the President today. (It also suggests that that vigilance is, shall we say, one-sided. Attacks against the President for allowing the towers to be destroyed "on his watch," as it were, would be unlikely to arouse the same sense of outrage.)

On The Early Show this morning, however, CBS has chosen to play politics right from the start. In the very first "news" segment of the show, at 7:03 EDT, Harry Smith spoke to CBS White House correspondent Jim Axelrod, who chose to focus his report on ... the President's approval ratings.

Jim Axelrod: The President's aides have made it clear this is no time for politics, although his very presence here is a reminder of the lost popularity for Mr. Bush in the past five years....In the days and weeks after the President climbed that rubble pile at Ground Zero and promised revenge, the President had an 89% approval rating. Five years later that number is 36%. Later today the President will head from here in Manhattan to Shanksville, Pennsylvania. At 11:45 A.M., Mr. Bush will participate in a ceremony in Shanksville. He will then fly to Washington to lay a wreath at the Pentagon. At 9:00 tonight the President will address the nation in what we're told will be a non-political speech. (emphasis mine)

So, we start the 9/11 anniversary show by focusing on the President's approval ratings. (I believe we can safely assume that, if the ratings were 55-60%, instead of 36%, that would not have been where they focused the first story.) He refers to "the President" and "Mr. Bush," but never to "President Bush."

And, when speaking of tonight's speech, he makes sure we understand that "we are told" it will be non-political, bringing politics into it again. Of course the President will address the nation tonight. It is the 5th anniversary of the most traumatic day in the last 40 years of this nation's history. There's no reason whatsoever that anyone should hear that the President is addressing the nation tonight and think, "hey, he's playing politics!" The simple citation of that, along with the "we are told," serves one purpose - to make people think that it may, in fact, be a political speech*. Nice work, CBS.

The entire clip can be seen here.

* - Of course, it is a political event. The fact is, the President of the United States is not just the Commander in Chief - he's the Politician in Chief. Any act that he takes, any word that he says, has political implications and overtones. But when the network focuses, the way that CBS did this morning, on the political implications, rather than on the events or words themselves, it imputes a certain cynicism to the events or words that aren't necessarily there. It represents negative politicking on the part of the media to approach it this way.