For Bill Press, Ground Zero Is Sacred Until Conservatives Say So 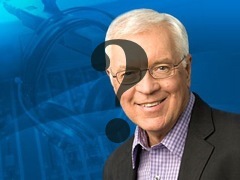 Bill Press is confused. He can't seem to decide whether Ground Zero is a sacred site. When he was using the memory of 9/11 as a political football to blast Glenn Beck, lower Manhattan was hallowed ground. But now that conservatives are making that claim, Press has proclaimed that the area "is not a sacred site." Make up your mind, Bill!

In June, Press compared Beck's planned 8/28 rally at the Lincoln Memorial commemorating the anniversary of Dr. Martin Luther King's "I have a dream" speech to an Al Qaeda "rally on September 11 - at Ground Zero." "Sometimes you have to stand up and say, this is wrong - the wrong place," he added. "It's a slap to the American people... There are some places where cheap political tricks should not be allowed."

But now that the right is saying virtually the same thing about the Ground Zero Mosque, Press has proclaimed that "there's only one reason to oppose this mosque, and that is to paint Islam as an evil religion and to paint all Muslims and equate them with a 19 terrorist who's flew into that building. it is wrong. it is un-American and the people against it ought to be ashamed of playing a cheap political trick" (h/t Jamas Taranto).

Well which is it?

The Tea Party is comparable to the Islamic terrorists who murdered thousands on 9/11, but it's un-American to criticize a mosque near Ground Zero because to do so is to blame an entire group for the actions of a few? This is hilariously misguided and insane even for Bill Press.