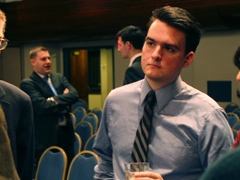 UPDATE | Lachlan Markay - 6/25, 3:00 PM: A roundup of reactions from all over the blogosphere and twitterverse below the fold.

Washington Post blogger Dave Weigel resigned today after a host of offensive e-mails surfaced revealing his disdain for much of the right - the beat he was charged with covering. Fishbowl DC, which published a number of those emails yesterday, confirmed the resignation with the Post just after noon.

Yesterday I reported on leaked emails from Weigel to a listserve of liberal journalists bashing conservatives and conservatism - you know, the people Weigel is supposed to be covering. As bad as those email were, a plethora of messages from Weigel published in the Daily Caller take the conservative-bashing to a whole new level.

Many of the misguided statements were clearly made in jest - "I hope he fails," Weigel said of Rush Limbaugh after the radio host was hospitalized with chest pains, a reference to Limbaugh's hope that Obama's agenda would fail. But other bouts of name calling - ragging on the "outbursts of racism" from "amoral blowhard" Newt Gingrich, for instance - were obviously not jokes.

The Daily Caller revealed some quite stunning statements from the JournoList in its piece today:

In other posts, Weigel describes conservatives as using the media to “violently, angrily divide America.” According to Weigel, their motives include “racism” and protecting “white privilege,” and for some of the top conservatives in D.C., a nihilistic thirst for power.

“There’s also the fact that neither the pundits, nor possibly the Republicans, will be punished for their crazy outbursts of racism. Newt Gingrich is an amoral blowhard who resigned in disgrace, and Pat Buchanan is an anti-Semite who was drummed out of the movement by William F. Buckley. Both are now polluting my inbox and TV with their bellowing and minority-bashing. They’re never going to go away or be deprived of their soapboxes,” Weigel wrote.

Of Matt Drudge, Weigel remarked,  “It’s really a disgrace that an amoral shut-in like Drudge maintains the influence he does on the news cycle while gay-baiting, lying, and flubbing facts to this degree.”…

Republicans? “Ratf--king [Obama] on every bill.” Palin? Tried to “ratf--k” a moderate Republican in a contentious primary in New York. Limbaugh? Used “ratf--king tactics” in urging Republican activists to vote for Hillary Clinton in open primaries after Obama had all but beat her for the Democratic nomination.

Weigel continued to defend these outbursts, as he did when contacted by the Daily Caller. "My reporting, I think, stands for itself," he said. “I’ve always been of the belief that you could have opinions and could report anyway… people aren’t usually asked to stand or fall on everything they’ve said in private.”

First, there's the issue of whether anything said on a 400-member email list can really be considered "private." "There’s no such thing as off-the-record with 400 people," Nation columnist Eric Alterman told Politico.

But the real issues are, first, whether such mean-spirited jabs demonstrate a disdain for many conservatives that precludes Weigel from covering them fairly (he did label gay marriage opponents "bigots," after all), and second, whether the Post feels it is appropriate to have someone hostile to the right covering conservatism, while a through-and-through liberal in Ezra Klein covers the left.

The Post signaled that it did not consider Weigel's comments to be a serious problem. It seems that attitude has changed.

Managing Editor Raju Narisetti told Politico that "Dave’s apology to readers reflects he understands, in calmer hindsight, the need to exercise good judgment at all times and of not throwing stones, especially when operating from inside an echo-filled glass house that is modern-day digital journalism." He added that it was "time to move on."

Below is a roundup of reations from prominent online commentators since Weigel's resignation.

Politico's Ben Smith paints Weigel as an unfortunate casualty of the collapsing facade of objectivity in the Post's online efforts.

The current flap over Washington Post blogger Dave Weigel has its roots in a fact that suprised me when I learned of it earlier this year: The Post appears to have hired Weigel, a liberal blogger, under the false impression that he's a conservative. The new controversy over the revelation that he's liberal is primarily the Post's fault, not his, except to the degree that he allowed the paper's brass to put him in an unsustainable position.

Having an anthropological study of conservatives, such as Dave provides, would work if the Post had a similar anthropological look at liberals from someone on the outside to balance it.  As it stands, however, Post readers get a Conservatives In The Mist approach that seems to predicate itself on the belief that they can’t figure conservatives and conservatism out for themselves.  That’s not a reflection on Dave, but a criticism of the editorial decision to pursue a one-sided strategy of critical analysis at the Post.

And indeed, one of the most interesting elements of the reaction to Weigel's resignation seems to be the admission, or at least the acknowledgment, that he is, in fact, a liberal. The "libertarian" label seemed to stick.

But today,  Weigel's liberalism was treated as a given. Even Keith Olbermann, on whose show Weigel is a regular guest, tweeted his agreement: "If the WaPost didn't know @DaveWeigel  wasn't a conservative blogger, it's time for the Post to FOLD. My full support is yours, David."

At the Atlantic, Jefferey Goldberg made that observation almost in passing. Goldberg went on to make what has been (somewhat surprisingly) a sparsely invoked argument in the hours since Weigel's resignation: that the crudity of his comments itself was enough to sully his reporting.

Media consultant Josh Treviño claimed on Twitter that "nearly all journalists mock their subjects. Maybe not the ones covering elementary schools. But all the others." But Goldberg disagrees:

"How could we destroy our standards by hiring a guy stupid enough to write about people that way in a public forum?" one of my friends at the Post asked me when we spoke earlier today. "I'm not suggesting that many people on the paper don't lean left, but there's leaning left, and then there's behaving like an idiot."

I gave my friend the answer he already knew: The sad truth is that the Washington Post, in its general desperation for page views, now hires people who came up in journalism without much adult supervision, and without the proper amount of toilet-training. This little episode today is proof of this. But it is also proof that some people at the Post (where I worked, briefly, 20 years ago) still know the difference between acceptable behavior and unacceptable behavior, and that maybe this episode will lead to the reimposition of some level of standards.

Others, such as NewsBusters contributor Dan Gainor and National Review's Jim Geraghty, attributed Weigel's decline not so much to the language he used as to his style of reporting; his tenancy to seek out the fringe elements of the movement, and focus on them, rather than on mainstream conservatism.

As Gainor said in a statement today,

Weigel’s rapid meltdown showed the incredible danger for traditional media to play fast and loose mixing news and opinion. The Post was either unwilling or unable to find a neutral reporter to cover conservatives. Nor did it hire an actual advocate as it has done for the left with Ezra Klein. Instead, the Post brought in someone who tried to tear down conservatives and look at the right as if he were visiting a zoo. This disaster should be proof enough that their method was a failure.

Dave only fits the loosest definition of conservative; I think he’s best defined as a left-leaning, idiosyncratic libertarian. He is also a political junkie with a voluminous appetite for news and a dogged reporter. From where I sit, he spends too much time writing about fringe figures and trends that are largely irrelevant to national politics (Orly Taitz, Birthers, etc.) but perhaps that’s his genuine fascination and/or what his employers wanted. Righties suspected Dave wanted to spotlight the freakiest and least appealing self-proclaimed “conservatives”; I suspect that at least part of Dave’s mentality was simply, “You have got to hear what this lunatic is saying.”