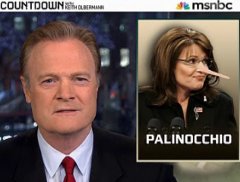 MSNBC contributor Lawrence O'Donnell will take over at the 10 pm slot, the cable network announced Tuesday. O'Donnell, who guest-hosted "Countdown" while Keith Olbermann was on leave, is a self-described socialist, and will fit in nicely with the rest of MSNBC's prime-time lineup.

The 10 pm slot has up to this time been "Countdown" reruns, so MSNBC viewers will now be treated to a tad different far-left rant than Olbermann's 8 pm far-left rant.

That said, O'Donnell's segment will hardly be a breath of fresh air if his previous antics are any indication. He has a short, if colorful history of liberal outbursts. Let us review some of his greatest hits:

As mentioned above, O'Donnell made sure to correct Joe Scarborough on "Morning Joe," telling him, "we're socialists, not Marxists."

O'Donnell then launched into a vicious tirade against author and former Bush speechwriter Marc Thiessen that forced Scarborough to cut to commercial early. When the program returned, Scarborough carefully mediated the discussion.

The new MSNBC anchor has challenged the basic mental fortitude of Sarah Palin. Though that is hardly groundbreaking for a liberal, I suppose, O'Donnell even hosted a comedian to bizarrely mock Palin in drag.

O'Donnell retains the dubious honor of conducting "possibly the worst interview in history." A member of Congress told him during an interview, "you're illustrating why MSNBC's viewership is in the tank."

To his credit, O'Donnell was one of the few liberal media figures to accurately report that ObamaCare would mean a de facto tax increase--the largest one ever, by his account. But that didn't stop him from offering his support.
Taxes MSNBC Countdown Media Business ObamaCare Lawrence O'Donnell