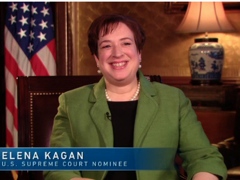 In the latest example of a pattern of opacity, the White House has cut off the press's access to Supreme Court nominee Elena Kagan. Kagan has extensive ties to journalists, which only serves as a testament to this administration's determination to control the message on its major initiatives, including Kagan's nomination.

"Tell her we're deeply frustrated," one reporter told White House press secretary Robert Gibbs of the administration's refusal to grant Kagan a traditional interview with the press. Kagan did do a short interview with a White House staff member released only online, in what CBS White House correspondent Peter Maer called "Kagan 'in her own words' without anyone else's words."

Washington Examiner White House correspondent Julie Mason was harsher in her criticism. The White House interview "doesn't count toward the administration's 'accountability' totals," she wrote on the paper's Beltway Confidential blog. "It's just another campaign commercial, masquerading as openness."

The New York Times's Sheryl Gay Stolberg was also disappointed by the interview.

Not surprisingly, there were no questions about her views on abortion, or executive power, or affirmative action, or any of the other hot-button issues that conservatives and liberals alike would love to hear her address. Rather, the video is a bland, overly scripted take on a woman who, by all accounts, is warm, funny and engaging.

The White House's interview with Kagan -- and its simultaneous refusal to allow the press corps meaningful access to the Solicitor General -- is but the latest example of the the administration's concerted efforts to control the flow of information by circumventing traditional journalists.

"This White House has taken its use of the web to a new level with this move," Maer noted. But the strategy has been ongoing for a while.

"[T]echnology gives this White House … the ability to distribute content to millions over the Internet without relying on third parties," reported Lloyd Grove last month.

Of course the press corps is not happy about the White Hosue's new reliance on new media. Helen Thomas told Grove that "we’re all suffering from the real lack of true communication… We can be ignored totally—almost. The White House feels they have other ways."

In all, Politico reported in late April, President Obama "has severely cut back the informal exchanges with the press pool, marking a new low in presidential access." He has also held very few formal press conferences. The last one was in July.

I have praised the White House's new media-centric communications strategy -- and taken on Thomas's criticisms -- as a means to avoid the liberal tint given the news by the overwhelmingly liberal press corps. But the strategy is only beneficial if the White House chooses to share information.

There is no reason that a Supreme Court nominee should have to field questions from a small, exclusive, and predominately leftist group of reporters. But a White House that touted transparency in governance as much as this one did needs to share information in some way if it wishes to live up to its own standards.

Rather than using technology to expand the sharing of information, this White House is using it to restrict it. The online-only Kagan interview was not a means to inform more Americans on the key questions surrounding her nomination, but rather to insulate her from those questions.

It serves as a testament to the White House's efforts that despite Kagan's extensive connections to journalists and major legacy media players, the administration has been able, thus far, to completely control the flow of information, post-nomination.

For Elena Kagan, this much is true: She has friends in journo circles. Seems like everybody has a "Kagan Connection."…

"I first met Kagan in the mid-'90s when we were both former law clerks for Judge Abner Mikva on the U.S. Court of Appeals for the D.C. Circuit," wrote The New Republic's Jeffrey Rosen.

"I had her for two classes" at Harvard Law School, said CBS' Jan Crawford Greenberg. "But she was very challenging, while at the same time very engaging and lively."

And those are just her periphery acquaintances.

"Elena danced at our wedding in 1986," wrote The New Yorker's Jeffrey Toobin. "When my wife, Amy, and I bought our first apartment, Elena’s father was our lawyer."

David Brooks wrote: "Kagan has many friends along the Acela corridor, thanks to her time at Hunter College High School, Princeton, Harvard and in Democratic administrations. So far, I haven’t met anybody who is not an admirer."

CQ's Seth Stern told MSNBC: "I was her student in administrative law class" at Harvard.

And, as Howard Kurtz points out, she was even once a lawyer for the Washington Post.

Is it "weird that the White House would choose this  controversial approach in its media unveiling of Kagan," as Politico's Patrick Gavin suggests? It seems that it is quite in line with the White House's communications strategy.

It is controversial, yes, but it seems that the administration would rather stir up controversy with people who don't know Kagan and think they should, than with people who do know her, and don't like her.
Appointments Judiciary Kagan Nomination CBS Media Business Online Media Politico Web 2.0 Blogs Government & Press Journalistic Issues Elena Kagan