Scott Brown to CNN's Gergen: 'It's Not the Kennedys' Seat' 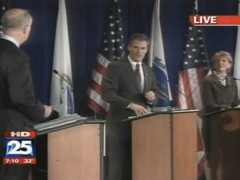 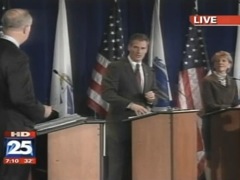 Update - 9:25 AM | Lachlan Markay: David Gergen commented on Brown's response. His comments below.

The death of Ted Kennedy hit the liberal media particularly hard. NBC's Andrea Mitchell caught the mood of the nation's pundits when she said the "heavens were weeping" during Kennedy's funeral. Now that Kennedy is dead, some pundits feel as if Democrats are entitled to the seat he left vacant.

CNN senior political analyst David Gergen had to be reminded of this fact Monday as he moderated a debate between the two candidates for Massachusetts's open Senate seat. He asked Republican candidate Scott Brown whether he'd be willing to "sit in Teddy Kennedy's seat and [say] I'm going to be the person who's going to block it [liberal health care policy] for another 15 years."

But Brown, refusing to take for granted Gergen's blatantly left-wing premises, responded instead: "Well, with all due respect it's not the Kennedys' seat, and it's not the Democrats' seat, it's the people's seat." (video and transcript below the fold - h/t Kerry Picket)

GERGEN: Mr. Brown, let me ask you this question, it's on a lot of people's minds. You said you're for health care reform, just not this bill. We know from the Clinton experience that if this bill fails, it could well be another 15 years before we see health care reform efforts in Washington. Are you willing under those circumstances to say, 'I'm going to be the person. I'm going to sit in Teddy Kennedy's seat and I'm going to be the person who's going to block it for another 15 years'?

BROWN: Well with all due respect its not the Kennedys' seat, and its not the Democrats' seat, it's the people's seat. And they have the chance to send somebody down there who is an independent voter, and an independent thinker and going to look out for the best interests of the people of Massachusetts. And the way that this bill is configured, I'd like to send it back to the drawing board because I believe people should have insurance. Not just this particular bill because it's not good for the entire country. You're talking about another trillion dollars in costs, a half a trillion dollars in Medicare cuts, military people, if you're veterans, you're going to have cuts in Tricare, and it's not good. We need to go back to the drawing board. Nobody has confidence in this bill right now.

Update: Gergen admitted to National Review that Brown "stuffed me on that. ... Scott Brown gave a very good impression of who he was and what he stood for. He was fast on his feet." But Gergen is still confident that Coakley will carry the day next week. The voters of Massachusetts, he said, "want to show their frustration, but they aren’t willing or ready, yet, to send a Republican to the Senate."
Congress Health Care Campaigns & Elections Covert Liberal Activists Medical Insurance Debates 2010 Congressional CNN Government & Press Journalistic Issues ObamaCare Scott Brown David Gergen