On War Policy, Comparisons to Lincoln Only Favorable for Democrats 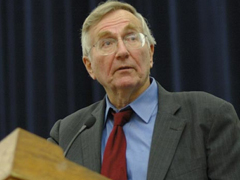 On last night's "Rachel Maddow Show", the New Yorker's Seymour Hersh commended President Obama for taking the reins in Afghanistan. Hersh stated that Presidents must decide their own war strategies. But in the early stages of the war in Iraq, Hersh was a leading critic of similar actions by the Bush administration. Hersh's hypocrisy suggests he is more concerned with the political implications of military policy than strategic ones.

"Lincoln did not let McClellan write a report on how to win a war against the South," Hersh told Maddow, in reference to Gen. George McClellan, initially the top general for the Union during the Civil War. Hersh was offering a historical perspective on why Presidents should not rely on military commanders to form strategy--McClellan was a disastrous general, after all (video embedded below the fold).

The comparison seems reasonable--if a bit cynical--but it turns out that Hersh offered the same historical comparison in denouncing then-Defense Secretary Donald Rumsfeld for going over the heads of military leaders in forming the strategy for the invasion of Iraq.

Rumsfeld’s personal contempt for many of the senior generals and admirals who were promoted to top jobs during the Clinton Administration is widely known. He was especially critical of the Army, with its insistence on maintaining costly mechanized divisions. In his off-the-cuff memoranda, or “snowflakes,” as they’re called in the Pentagon, he chafed about generals having “the slows”—a reference to Lincoln’s characterization of General George McClellan. “In those conditions—an atmosphere of derision and challenge—the senior officers do not offer their best advice,” a high-ranking general who served for more than a year under Rumsfeld said...

Gradually, Rumsfeld succeeded in replacing those officers in senior Joint Staff positions who challenged his view. “All the Joint Staff people now are handpicked, and churn out products to make the Secretary of Defense happy,” the planner said. “They don’t make military judgments—they just respond to his snowflakes.”

Hersh had stern criticisms for the Bush Administration when it disregarded the considered opinions of some of its most senior military advisers. He even quoted Rumsfeld complaining that top generals were the George McClellans to Bush's Lincoln. But this comparison did not elicit the sympathy for Bush's attempts to take the reins in Iraq that Hersh shows Obama's efforts to go over Gen. McChrystal's head.

"Obama is putting his foot down, and that's great. He's making a political gamble in a sense. It's a little too early to say, but he's grabbing it. He's grabbing it, and he hasn't been grabbing it until now," Hersh told Maddow.

Hersh's narrative is this: Obama is trying to wrest control of the war from military advisers who won't offer candid advice. Rumsfeld, on the other hand, simply purged the military of anyone who would not sign off on the administration's policies.

In both cases, as in the Lincoln-McClellan paradigm, the executive seized control over military operations from the top generals. In Obama's case, Hersh thinks it's "great." In Rumsfeld's, it signified a failure "to anticipate the consequences of protracted warfare."

Hersh supports Obama's attempt to circumvent high-level military commanders because he agrees with the president politically. As one of the most prominent critics of the Bush administration's military policy, however, Hersh did the best he could to portray the same policy he now supports as reckless disregard for the opinions of military experts. The double standard is glaring.
Foreign Policy Iraq Appointments War on Terrorism Middle East Military Double Standards Islam Afghanistan MSNBC New Yorker Rachel Maddow Show George McClellan Seymour Hersh Abraham Lincoln Stanley McChrystal