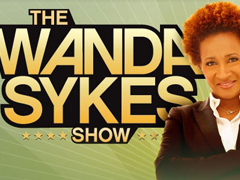 Wanda Sykes debuted her new comedy show Saturday on Fox. That critics met the show with reviews of varying degrees of mediocrity is hardly surprising, as Sykes simply recycled years of Bush-bashing and Obamamania into her monologue, which set the mood for the show.

Sykes is well known in political circles for proclaiming "I hope his kidneys fail" in reference to Rush Limbaugh at this year's White House Correspondents' Dinner. She went on to make fun of Limbaugh's former drug addiction, liken him to terrorists, and call for him to be waterboarded.

So it came as little surprise that Sykes kicked off her new show with attacks on Ann Coulter, discussions of environmentally-friendly sex toys, accusations of racism leveled against Rush Limbuagh, and an anti-Bush, Obama-crazed diatribe (video and partial transcript below the fold).

Can someone explain something to me? Cause I passed out the other night - I mean I went to sleep - when I woke up, people were mad at Obama! And I thought, ‘Did I miss something?’

Did Obama start two illegal wars? Did he fly over a flood zone and just wave? Did he torture detainees in a secret prison? Did he start illegally tapping phones? Did he alienate the world and squander a budget surplus? Because if he did any of that, we need to impeach that jackass.

He’s only been in office ten months, so what exactly has Obama done to piss everybody off? Nothing! People are going crazy calling him a Fascist. These people don’t even know what a Fascist is. When you say things like, ‘We’re gonna vote that Fascist out of office!’, you really sound dumb. When was the last time a Fascist got voted out of office? They usually stick around...

How do you get upset about the President of the United States encouraging kids to study hard? You know that was probably the first time these parents even paid attention to what was going on in their kids’ school...

This week on Fox News Sunday Rush Limbaugh attacked President Obama, saying that he has a radical agenda and is a little boy who is driven by his out-of-this-world ego. Hmm. Sounds to be like the pot calling the kettle the uppity negro.

I can’t believe people are blaming Obama for the mess Bush left. Bush just pees all over everything. Things are soaking wet, and people are looking at Obama as if he just zipped up his fly...

See what the problem is – the Obamas are way too classy to get all up in people’s faces. So that’s why I’m here. So you know what – I hereby appoint myself the President’s ‘tell people where to go and what to kiss Czar'.

Wonderful. The class and originality are simply stunning.

Apparently critics were not aching for another bastion of left-wing thought on broadcast television (Family Guy will do just fine). Media Life Magazine said it all in its headline: " 'The Wanda Sykes Show': Not Funny". Entertainment Weekly said Sykes was "trying too hard for too few laughs". USA Today claimed the show "lacks spark".

And the UK Telegraph, which called the show a "perplexing presentation masquerading as hip," noted with curiosity that "this must be the first time in American history that a television 'talk show host' has announced her purpose as the defender of a sitting president."

Indeed, while it is a tried and true comedic method to criticize those in power, few comedians--until November 2008 anyway--had much interest in defending a sitting president. It is much easier--and funnier--to bash politicians for the silly things that they do and say. A performer crosses the line from pure purveyor of the comedic arts to a political pundit with some jokes under his belt when he begins flacking for his favorite elected official (see Stewart, Jon; Colbert, Stephen).

Sykes obviously does not like conservatives, so it is to be expected that her talk show would focus on insulting them--especially give her penchant for ad hominem attacks. But if that is all she has to offer, she won't last long in her new role as talk show host.
Liberals & Democrats Conservatives & Republicans FOX USA Today Foreign/Non-English Media Entertainment Weekly Celebrities Wanda Sykes