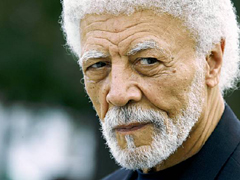 The Democratic mayor of Oakland, CA and his wife recently admitted to failing to pay $239,000 in taxes since 2005. The San Francisco Chronicle covered the story, but made no mention of the mayor's party, in striking contrast to coverage of recent ethics violations by Republicans in the state.

"We owe taxes," Mayor Ron Dellums, pictured right, bluntly said in a statement on Tuesday. "The matter is being dealt with and will be resolved in short order." The IRS imposed a tax lien on the couple's $1.4 million home in the Foxhall Crescent neighborhood in Washington, DC, and 3,200 square foot house in Oakland Hills.

There is no party identification in the story, however, only a statement in the second-to-last paragraph that Dellums is a "stalwart of progressive ideals." It seems the Chronicle could not bring itself to state the he is a Democrat.

In contrast, the coverage of Orange County Assemblyman Mike Duvall's extramarital affairs with lobbyists--which were revealed after a tape surfaced showing Duvall bragging to a colleague about some of the more lurid details--made sure to emphasize the fact that he is a Republican.

"An Orange County Republican resigned from the Assembly Wednesday after a videotape surfaced of the lawmaker bragging about his sexual exploits with two women, one of whom reportedly is a lobbyist." So read the lede of a September 10 story in the Chronicle on the Duvall scandal.

The article went so far as to point out that "Duvall's Republican colleagues stopped short of condemning him for his actions." But nothing in the piece on Dellums discusses his colleagues' reactions, only quoting a tax attorney and a Cal State Sacramento professor on the mayor's situation.