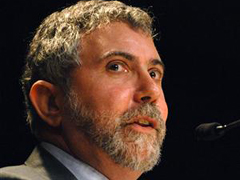 Paul Krugman attacked the authors of the soon-to-be-released book SuperFreakonomics today for their audacious attempts to question the left's conventional wisdom on global climate change. He then touted the danger of attacking conservatives, and contended that liberal-bashing has always been the safer political and professional move.

I have a theory here, although it may not be the whole story: it’s about careerism. Annoying conservatives is dangerous [his emphasis]: they take names, hold grudges, and all too often find ways to take people who annoy them down... [Conservatives] snub anyone who breaks the unwritten rule and mocks those who must not be offended.

Annoying liberals, on the other hand, feels transgressive but has historically been safe. The rules may be changing (as [SuperFreakonomics authors Stephen] Dubner and [Steven] Levitt are in the process of finding out), but it’s been that way for a long time.

Didn't Rush Limbaugh find out last week the true price of annoying liberals? His hope of owning a piece of an professional football team was dashed by the left, who falsely attributed fabricated quotes to the talk radio star in a successful effort to shame the NFL into denying Rush's bid.

Roger Goodell, the league's commissioner, claimed that Limbaugh's "divisive comments" did not live up to the NFL's "higher standard" to which people in "responsible positions" are held. As my NewsBusters colleague Jeff Poor pointed out, Goodell had no problem with retaining the divisive Keith Olbermann.

Fox News certainly knows the price of annoying liberals. They have said things that a Democratic administration does not like, and the White House has pursued a nationwide attack campaign against the network. Glenn Beck persevered against calls for an advertising boycott of his show after he said things that offended the left.

Whole Foods CEO John Mackey did nothing less than express his own views on health care reform in a Wall Street Journal op-ed. Liberals, well represented among Whole Foods's customer base, called for a boycott of the supermarket chain.

Dunber and Levitt are not the only ones to feel the wrath of the radical environmental movement. Last night was the premiere of "Not Evil, Just Wrong", a documentary questioning the radical approach to climate change promoted by Al Gore and fringe environmentalists.

One of the film's directors, Ann McElhinney, said during the post-screening panel discussion that she had received numerous death threats for daring to question the wisdom of radical and immediate action to combat climate change. One aggressor reportedly hoped that McElhinney's children would be "born retarded."

So where does Krugman get this fantastical idea that questioning conservatives is dangerous, but questioning liberals has "historically been safe"? Ace contends that

Liberals, of course, also have a great deal of distance between their own capacities for unfairness, nastiness, dishonesty, and hypocrisy than they believe they do. Again, their sense of self depends heavily on the proposition that they are superior, if not superlative, in their fairness, civility, honesty, and integrity; they have great difficulties admitting deficiencies (beyond a fairly trivial sort) in any of these virtues.

Ann Althouse sees a disgust with SuperFreakonomics's all-but-assured success as the source of Krugman's indignity.

I think it's pretty clear that Krugman is irked that contrarianism sells and that — in a media world where liberalism dominates — there's a temptation to veer right just to be exciting. Krugman, I think, would like to make sure that that sort of transgression is punished. It's just not fair — I picture him thinking — for people who are supposed to be liberal — to reap $$$$ by hurting liberal causes, so let's damn any liberal who doesn't toe the liberal line as a careerist.

I am inclined to see Krugman's words as an attempt to portray the left as the perpetual underdog in the national discourse. Democrats enjoy a sitting president, a super-majority in Congress, and unending support from the mainstream media and pop culture icons. In short, liberals have no excuse for failing to enact their favored reforms aside from a considerable lack of merits supporting them.