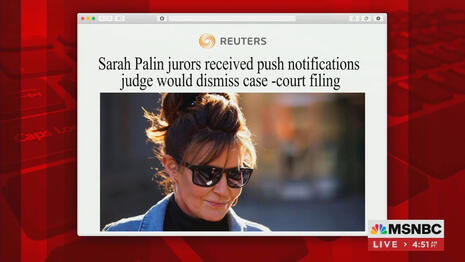 On Wednesday, Hot Air Senior Editor Allahpundit reported: “Every lawyer I know on Twitter was stupefied at Judge Jed Rakoff’s decision a few days ago to toss Sarah Palin’s defamation suit against the New York Times....What the Twitter lawyers were shocked by was Rakoff’s timing.” He explained that “the jury wasn’t sequestered,” before citing NPR media correspondent David Folkenflik pointing out that “Rakoff says ‘several’ jurors said they had ‘involuntarily’ received smartphone alerts informing them judge had already decided to dismiss case before verdict.”

“All Rakoff had to do was wait until the verdict was in. If the jurors found the Times not liable — which they ultimately did — then he wouldn’t have needed to issue his ruling,” Allahpundit observed, before concluding: “Instead he announced his ruling before the verdict was in, potentially giving Palin cause for appeal. What was he thinking?”