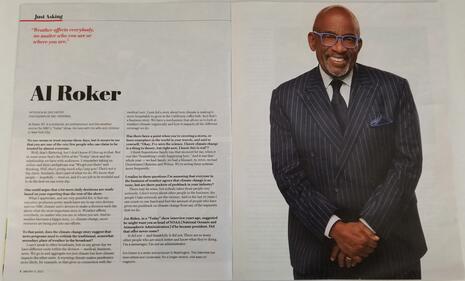 “No one seems to trust anyone these days, but it occurs to me that you are one of the very few people who can claim to be trusted by almost everyone. Maybe more people are aware of what you say each day than what the president says,” Easter swooned at the top of the obsequious exchange. Roker replied: “Well, that’s flattering, but I don’t know if I live up to that. But in some sense that’s the DNA of the ‘Today’ show and the relationship we have with audiences....people — hopefully — trust us, and it’s our job to be truthful and to do the best we can every day.”

The Washington Post journalist wondered: “...does the climate change story suggest that news programs need to rethink the traditional, somewhat secondary place of weather in the broadcast?” Roker touted how climate fearmongering could be connected to everything: “...on any given day we have different units within the division — medical, business, news. We go in and aggregate not just climate but how climate impacts the other units. A warming climate makes pandemics more likely, for example, so that gives us connection with the medical unit.”

In 2020, Roker claimed that one “silver lining” of the pandemic killing millions of people was that pollution was “way down.”

After Easter insisted that despite having “no evidence,” his “gut” told him climate change was real, Roker declared:

I think they are absolutely right. I think people intrinsically know our climate is changing. You may get a fight about what’s causing that, though I don’t think there’s really any question about it. I think it’s pretty well determined now that it’s due to human activity, what we do and how we power our cars, homes and factories. The planet is warming, our oceans are warming. That ship has sailed. People feel it, they know it. That’s why I think the populous is far ahead of their elected officials.

“So where is the disconnect for action? In the politics? In the storytelling? In who’s doing the telling?,” Easter fretted. Roker excitedly claimed: “I think people want action, and they are taking it into their own hands. Solar power, creating bike lanes, banning and limiting different types of activities: This movement is happening at a grass-roots level.”

When asked about the recent COP26 climate summit and plans by the Biden administration to rejoin the Paris Climate Agreement, Roker demanded more: “We can’t stop; we have to keep going. Yes, nobody’s doing everything that could be done, everything is a compromise. At what point is there a tipping point where it’s too little, too late?” He hailed “automakers moving away from the internal combustion engine” and how “some consumers...expect that the companies they buy things from share their values.”

Easter worried whether there was enough leftist media uniformity on the issue: “I realize in these questions I’m assuming that everyone in the business of weather agrees that climate change is an issue, but are there pockets of pushback in your industry as well?” Roker assured him that such difference of thought was not tolerated:

There may be some, but nobody takes those people very seriously. I don’t worry about other people in the business; the people I take seriously are the viewers. And in the last 10 years I can count on one hand and foot the amount of people who have given me pushback on climate change from any of the segments that we do.

He then laughably maintained: “We don’t scream, ‘It’s climate change!’ We try to make it as organic as possible, and if there’s a connection we point that out, and if not, we don’t.” This coming from the same person who once preached that not fighting climate change was a “sin.”

Alluding to Roker’s longtime embarrassing bromance with President Biden, Easter remarked: “Joe Biden, in a ‘Today’ show interview years ago, suggested he might want you as head of NOAA [National Oceanic and Atmospheric Administration] if he became president. Did that offer never come?” Roker humbly admitted: “It did not — and thankfully it did not. There are so many other people who are much better and know what they’re doing.” He then explained his real role: “I’m a messenger, I’m not an administrator.”

Roker knows that he’s far more effective as a climate propagandist for the White House on the Today show every morning rather than working for the Biden administration directly.