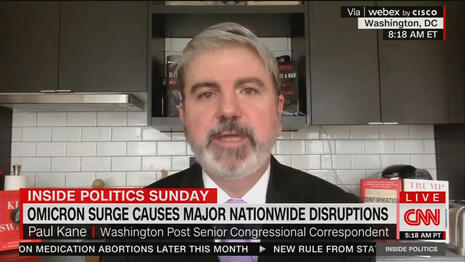 On Sunday, The Daily Wire’s Ryan Saavedra reported on how “A CNN panelist and Washington Post columnist slammed Democrat President Joe Biden on Sunday over the administration’s policies and messaging surrounding the coronavirus pandemic.” On CNN’s Inside Politics that morning, columnist Paul Kane declared: “It’s the worst kind of problem. They have a policy problem and a messaging problem.”

“And this administration, with all the money in the world, from the bipartisan deals of 2020 and the unilateral Democratic of $1.9 trillion bill in March, they had all the money in the world for testing, and they just didn’t focus on it. And that was a huge mistake. It’s a huge mistake,” Kane went on to tell the panel. Saavedra noted: “Six former advisers who counseled him during the presidential transition wrote this week in the Journal of the American Medical Association that it was time for Biden to change strategies to something geared toward living with the virus.”

Read the full article on The Daily Wire.