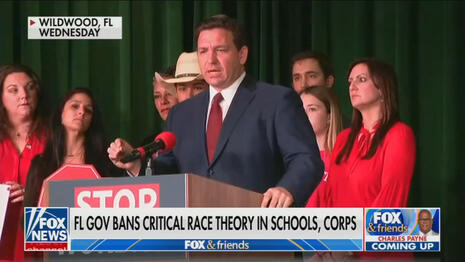 On Thursday, The Daily Signal’s Mary Margaret Olohan published a profile of Florida Governor Ron DeSantis’s press secretary and how the Republican’s communications team was taking on the left-wing media: “Christina Pushaw is not afraid to get down in the dirt with reporters who go after her boss.” The piece added that Pushaw “has repeatedly called out the press for ‘bad-faith coverage’ and ‘skewed’ or biased reporting.”

Olohan recounted her conversation with the head of DeSantis press relations: “‘They’re afraid of the governor,’ Pushaw said in an interview with The Daily Signal, pointing to national media focusing their attention on Florida news. ‘The left-wing elites, the establishment, and the corporate media are very much afraid of him. And it shows that he’s a good leader, and that he’s doing a good job.’”

Read the full article on The Daily Signal.