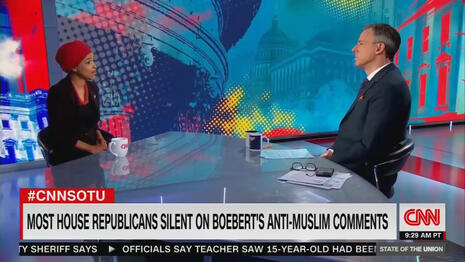 On Monday, CNSNews Morning Managing Editor Susan Jones reported on a softball Sunday interview CNN anchor Jake Tapper conducted with controversial far-left Congresswoman Ilhan Omar in which he gave the Democrat “a platform to condemn the ‘hateful, bigoted comments’ made about her by Republican Rep. Lauren Boebert,” but “never mentioned the ‘hateful, bigoted comments’ for which Omar was forced to apologize in February 2019.”

As Jones noted, Tapper’s first question to Omar was: “What is it like to hear that kind of blatant bigotry, blatant Islamophobia coming from a fellow elected member of the House of Representatives?” The article explained how “Tapper steered the interview in a direction that allowed Omar to describe the House Republican leader as ‘a liar and a coward’ and to paint all Republicans as Islamaphobes,” but that “At no time in Sunday’s interview did Tapper mention that Omar herself was forced to apologize for anti-Semitic remarks she made on social media.”