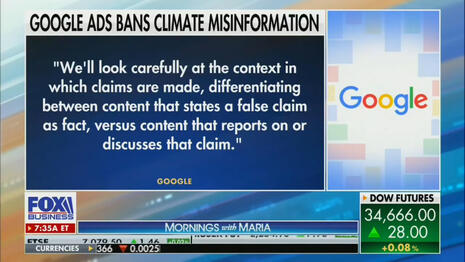 On Thursday, The Washington Free Beacon reported that Google and it’s subsidiary YouTube, starting in November, would end monetization of any content that engages in supposed “climate change denial.” The tech giant announced it would not tolerate anything that went against “well-established scientific consensus around the existence and causes of climate change.”

As Free Beacon’s Santi Ruiz explained: “The move is one of the most sweeping policy changes from a big tech company regarding what content is allowed or encouraged on the platform. Google says the change was driven by advertisers and video creators who ‘simply don’t want’ their content to appear next to ads or videos that contain ‘climate change denial.’”

Read the full article at The Washington Free Beacon.