Yahoo Buries Millions of Users Under Avalanche of Anti-Trump Headlines

It’s not just TV news that’s heavily skewed their election news this year – a major Internet news site has bombarded its readers with anti-Trump and pro-Biden headlines every morning for the past four months.

A Media Research Center analysis of The Daily Yahoo email newsletter, compiled by Yahoo News and delivered to the inboxes of approximately 225 million active monthly users of Yahoo Mail every day, found that from July 1 through October 31, those users were inundated with a startling 134 headlines negative toward President Trump. In sharp contrast, only six headlines were positive toward the President – a greater than 20-to-1 disparity. Meanwhile, Joe Biden received nearly twice as many positive headlines (29) vs. negative ones (16). 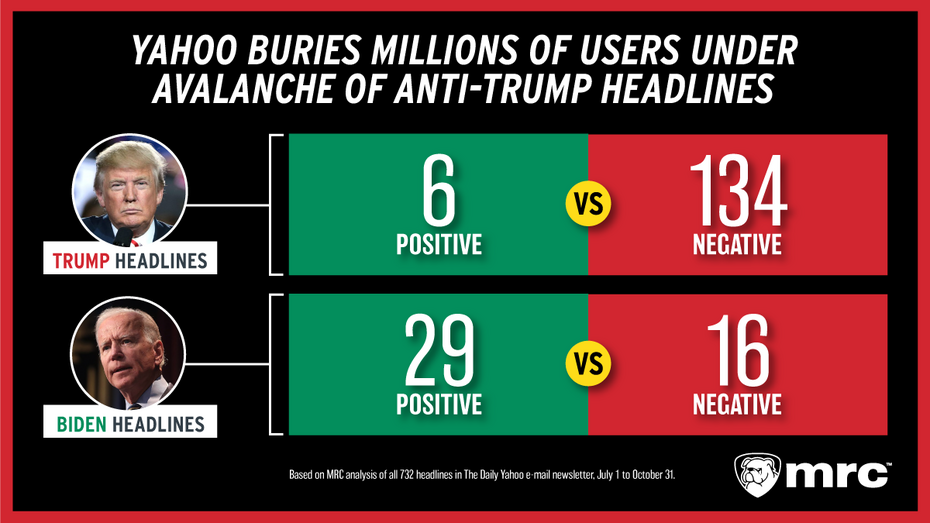 The Daily Yahoo is an aggregator newsletter that draws headlines from various media outlets, including Yahoo News, ABC News, Business Insider, The Independent, and Huff Post, among many others. Here’s just a sample of the kind of Trump-trashing headlines that were included in the newsletter in the months leading up to the election:

■ MSNBC’s Mika Brzezinski Calls Out Diehard Trump Supporters: ‘How Stupid Can You Be?’ – The Wrap, August 15

■ Democrats have a plan to disrupt Trump’s convention and cripple his message: report – Salon, August 23

In comparison, here are some of the positive headlines Biden was treated to over the same time period:

Out of 732 headlines featured in the newsletter over the four-month time period (six per day), 331 of them were related to politics or the 2020 presidential race. Out of that total, 99 were deemed neutral, meaning the headlines were either nonpartisan or were critical of both Trump and Biden. That left 232 headlines that were clearly favorable or unfavorable to one side of the political spectrum or the other.

If only a fraction of Yahoo Mail’s users in the U.S. read those headlines on a regular basis, that’s millions of voters who could have been influenced by an online news source with a clear partisan agenda against Trump and for Biden.