In the wake of the announcement on Sunday that Robert Mueller “did not find that the Trump campaign or anyone associated with it conspired or coordinated with Russia,” many in the news media are visibly upset with the Special Counsel for not being more aggressively anti-Trump. On Monday’s New Day, for example, CNN legal analyst Laura Coates exclaimed that it was “really atrocious” that Mueller refused to make a legal conclusion about whether the President had committed obstruction of justice, while over on NBC’s Today, co-host Savannah Guthrie fretted: “Is that a cop out? Isn’t this his job?”

On MSNBC’s MTP Daily on Friday, host Chuck Todd grumbled that Mueller had finished his work without the spectacle of bringing “the President of the United States in front of a grand jury.” Later on Hardball, Chris Matthews howled: “How can they let Trump off the hook?”

Given today’s media reaction to Mueller, it’s worth a look back at how the news media greeted the results of another presidential investigation two decades ago. Unlike today’s media disappointment in the favorable result for President Trump, when Independent Counsel Ken Starr delivered his report on President Bill Clinton’s scandalous behavior in 1998, the press launched a campaign to discredit, demean, and dismiss both the inquiry and the investigator himself.

Before Starr submitted his report, Clinton’s allies in the media had spent months preparing the public to view him as a partisan prosecutor. “What Starr is doing is trying to construct the truth according to Ken Starr,” Newsweek’s Eleanor Clift charged on the February 7, 1998 McLaughlin Group.

“You don’t have to be a conspiracy buff to have trouble with how the Whitewater investigation ended up focused on the President’s pants,” Time’s Richard Lacayo and Adam Cohen fretted in the magazine’s February 9, 1998 issue. “Going after the President’s sex life, wiring Linda Tripp to secretly tape Lewinsky, trying to persuade Lewinsky to tape Clinton – are those the actions of a conscientious prosecutor or a political hit man?”

NBC’s Tom Brokaw picked up that theme on the February 16 Nightly News: “Is he out of bounds or just tone deaf?...Has Starr gone too far in his pursuit of Monica Lewinsky and the President?” 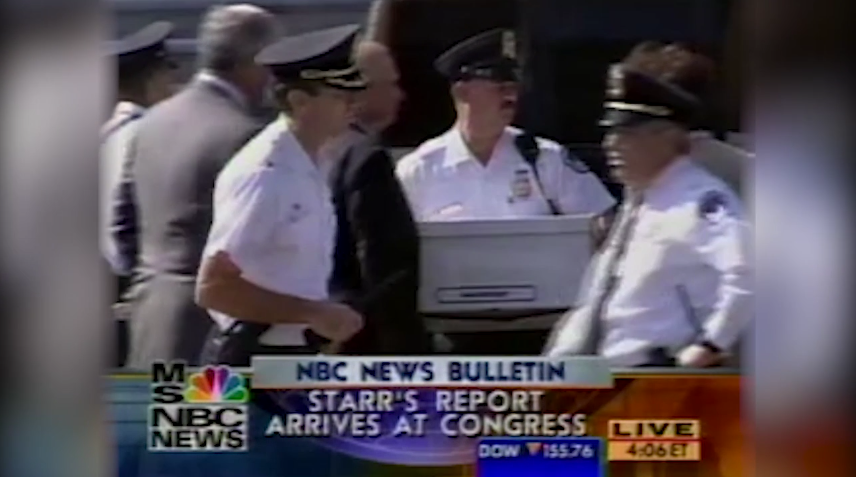 As copies of Starr’s completed report were delivered to Congress on September 9 that year, NBC reporter Gwen Ifill appeared on MSNBC and likened it to a violent bomb: “There’s very little they can do about this, when someone drives, as one House Judiciary Committee member put this some weeks ago, a truck bomb up to the steps of the Capitol and just dumps it on them....It is in some ways, politically, a very violent action for Ken Starr to leave this on them weeks before an election...”

The following evening, September 10, network anchors urged viewers to wait for Clinton’s side of the story. “Important note: This is purely a prosecutor’s document. There has been no defense, so far,” lectured Peter Jennings on ABC’s World News Tonight.

“For all of the talk of bi-partisan cooperation and caution, there’s plenty of impeachment talk in the air, plenty of resignation talk in the air, and a definite push for fast public release of the details of Starr’s report even before the Clinton camp sees it,” Dan Rather similarly declared on CBS Evening News.

The media tried to further erode the Starr report’s credibility by wailing over it’s necessarily graphic details of the President’s affair with then-White House intern Monica Lewinsky. On September 11, ABC’s 20/20 host Barbara Walters was aghast: “When you read this report it is so salacious, it is so graphic. There will be many people who will feel it’s disgusting, wonder what they’ll tell their children. There could be a backlash against Ken Starr.”

On CNBC’s Rivera Live, host Geraldo Rivera blasted the Starr report as an “avalanche of lurid allegations, legal arguments and political pornography.” During a two-hour Dateline special on NBC that same night, anchor Stone Phillips fretted: “Did this report have to be that detailed, that explicit? I mean you cringe when you read it....Should the President be subjected to that kind of embarrassment?” Today show co-host Katie Couric echoed those sentiments on the September 14 NBC morning show as she asked political commentator Pat Buchanan: “Do you think Ken Starr really had to get so graphic in this report? I mean it’s, much of it is in the ‘more than what we really wanted to know’ category. Did the details have to be so lurid?”

Journalists routinely referred to Starr’s probe as a “partisan” “witch hunt” against the Democratic president. During that Dateline special on September 11, Jane Pauley complained about Starr: “He was obligated to write a report and deliver a report to Congress. Was he also obligated to make it as adversarial as it turned out to be?”

Appearing on CNN’s Capital Gang on September 12, Wall Street Journal Washington Editor Al Hunt warned: “Let’s not pretend for a moment that the Starr report is a balanced, judicious presentation. It’s not. It is a partisan prosecutor with some zealous aides who’s trying to make a case against a guy he despises.”

“Couldn’t this be just a witch hunt, couldn’t the Democrats and President Clinton’s people who’ve been defending him all these months be right, that even though he screwed up there’s some political motivation there. Couldn’t that be right?,” co-host Lisa McRee desperately hoped on ABC’s Good Morning America on September 10.

Five days later, McRee was still repeating the same question: “The voters have twice elected this man President. Is it worth overturning the will of the people in order to impeach him if the only thing you can prove is that he lied about a sexual relationship with Monica Lewinsky?”

On September 12, NBC Nightly News correspondent Keith Miller actually traveled overseas to seek out international condemnation of Starr: “In France, Le Monde described the report as ‘a monster...worthy of the reports of the inquisition...where deviants and heretics were hunted down to the depth of their souls.’”

Rivera, known for his personal animus toward Starr, asked on CNBC’s September 16 edition of Up Front Tonight: “Does the Starr report herald the beginning of the era of sexual McCarthyism?” On his own CNBC show the next night, he reveled in decades-old adultery allegations surfacing against Republican Congressman Henry Hyde and ranted: “Isn’t this new era of the sexual witch hunt inevitable? Aren’t these suddenly panicked members of Congress now reaping what Ken Starr has sowed?” 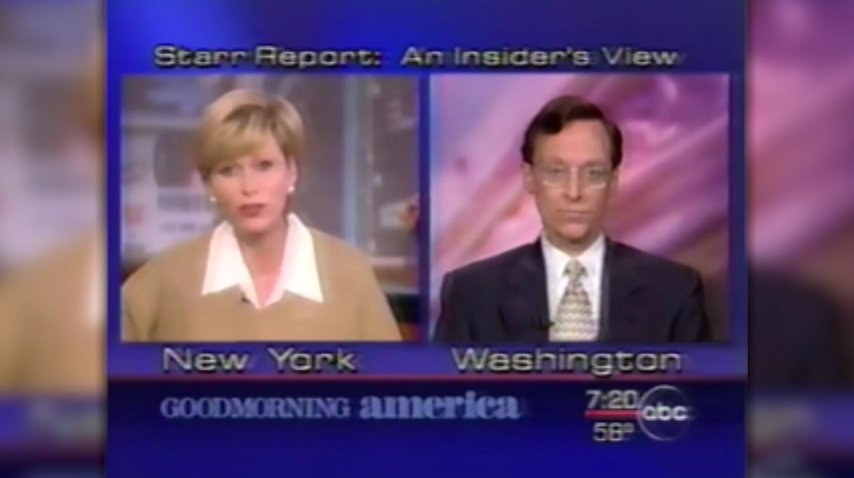 The coverage was so hostile that reporters even suggested that Starr himself should be investigated. After repeatedly calling the investigation a “witch hunt,” on the September 10 Good Morning America, ABC’s McRee grilled Starr’s deputy, John Bates, and demanded: “What does Kenneth Starr do now, and do you think he’ll be investigated?”

On the September 16 Today show, co-host Matt Lauer floated the idea that Starr should be forced to personally pay for the multi-million dollar investigation as punishment: “If there were no major revelations in the Starr report about all the gates, Filegate, Travelgate, Whitewater, why shouldn’t Ken Starr then pick up the other portion of the tab?”

Not only did the media rush to trash Starr and provide Clinton with political cover, but some in the press actually worried that they were providing too much air time to the story. On the September 14 Today show, Lauer engaged in such hand-wringing as he whined to liberal columnist Molly Ivins:

Over the past month there have been something like 400 segments on network news shows dealing with the President’s scandal. To be very honest 300 of them have aired on the main morning shows like this one. Is that too much coverage and why?...Do you think then that this scandal, Molly let me ask this, has this scandal done more to hurt the presidency or the press?

On CNN’s The World Today on September 15, correspondent Bruce Morton hyped a “split between voters and pundits” and even argued that Americans were telling the press: “‘Things are pretty good right now, leave the President alone, media; don’t rock the boat.’”

Just imagine the fury that would rain down upon any reporter that suggested such a thing regarding the Russia investigation in 2019.

Soon after the report’s release in 1998, Starr sat down for a November 25 interview with Diane Sawyer on ABC’s 20/20. The media bitterness over the investigation had not abated, with Sawyer painting Clinton as a victim: “Did you think to yourself, here is a man who has to deal with Saddam Hussein and bin Laden and what’s going on in Russia, and we’re putting him through this?”

When the results of an extensive investigation into the misdeeds of a president were covered 20 years ago, the media did everything possible to rip up the report and quickly move on. Two decades later, another investigation of a president has been completed, only this time the media wish it had lasted even longer and ended with even more indictments of top officials, including the President himself.