“Meanwhile, as the Democratic base pushes issues of racial and gender equality, New Jersey Senator Cory Booker asked tough questions about President Trump by MSNBC’s Chris Matthews,” Welker claimed. The soundbite followed of Matthews teeing up the liberal lawmaker to trash Trump: “Is he racist?” Booker started to respond, but did not immediately say yes, prompting Matthews to cut him off and repeat: “Is he a racist?”

Booker offered this rant against the President: “Racists think he’s racist. And his language hurts people. His language is causing pain, fear. The way he’s talking is making people afraid.”

Promoting O’Rourke’s “strong push to peal off key Trump voters,” Welker noted that the 2020 Democrat had a “meeting overnight with David Green, leader of the Auto Workers Union, who the President tweeted, ‘ought to get his act together and produce,’ over the closing of a GM plant in Lordstown, Ohio.” Welker falsely asserted that Haake “pressed” O’Rourke on the meeting. In actuality, Haake posed this friendly question: “What do you make, then, of the President taking shots at somebody like Dave over the plant closing?”

Predictably, O’Rourke condemned Trump for daring to criticize the union head he just met with: “The President with his actions has added insult to injury. Not only has he done nothing to prevent this job loss, he actually blames the workers and their leadership.”

Ironically, the segment began with co-host Hoda Kotb accusing the President of “lashing out” at his Democratic rivals. Meanwhile, the nasty attacks from Democrats were portrayed as addressing “issues of racial and gender equality” or trying “to gain ground with key Midwestern voters.”

Note to NBC: Asking a politician to attack a political opponent is not a “tough question,” it’s biased pandering.

Here is a full transcript of the March 19 report:

HODA KOTB: Now to the 2020 presidential race. President Trump is lashing out at a potential Democratic challenger while another Democrat, Beto O’Rourke, is boasting record fundraising in his first day of his campaign. We do have complete coverage. We’re gonna start with NBC’s Kristen Welker, she’s at the White House this morning. Hey, Kristen, good morning.

KRISTEN WELKER: Hey, Hoda, good morning to you. The battle to take on President Trump is heating up yet again today. Beto O’Rourke has fresh momentum after that major fundraising haul, and he’s making a strong push to peal off key Trump voters. For his part, President Trump is increasingly taking aim at his potential 2020 opponents.

[ON-SCREEN HEADLINE: The President and His Rivals; Takes Aim at Biden as Beto, Booker Speak Out]

WELKER: President Trump showered with chants of “four more years” at the White House overnight as he previewed his message against a potential rival, taking aim at Joe Biden after this slip of the tongue by the former Vice President.

JOE BIDEN: I have the most progressive record of anybody for the – anybody who would run. [Cheers and applause]

WELKER: The President tweeting Monday, Biden “was unable to properly deliver a very simple line about his decision to run for President. Get used to it, another low I.Q. individual!” For his part, Biden isn’t holding his punches either.

JOE BIDEN: Trump has turned his back on the very people he promised to help.

WELKER: A key question for Biden, can the political veteran convince the Democratic base that he’s the candidate of the future?

WELKER: It comes after former Texas Congressman Beto O’Rourke is aiming to build momentum, vowing to campaign in all ten New Hampshire counties this week, after raising $6.1 million in his first 24 hours of campaigning. And meeting overnight with David Green, leader of the Auto Workers Union, who the President tweeted, “ought to get his act together and produce,” over the closing of a GM plant in Lordstown, Ohio. O’Rourke, looking to gain ground with key Midwestern voters, pressed by NBC’s Garrett Haake.

GARRETT HAAKE: What do you make, then, of the President taking shots at somebody like Dave over the plant closing?

BETO O’ROURKE: The President with his actions has added insult to injury. Not only has he done nothing to prevent this job loss, he actually blames the workers and their leadership. 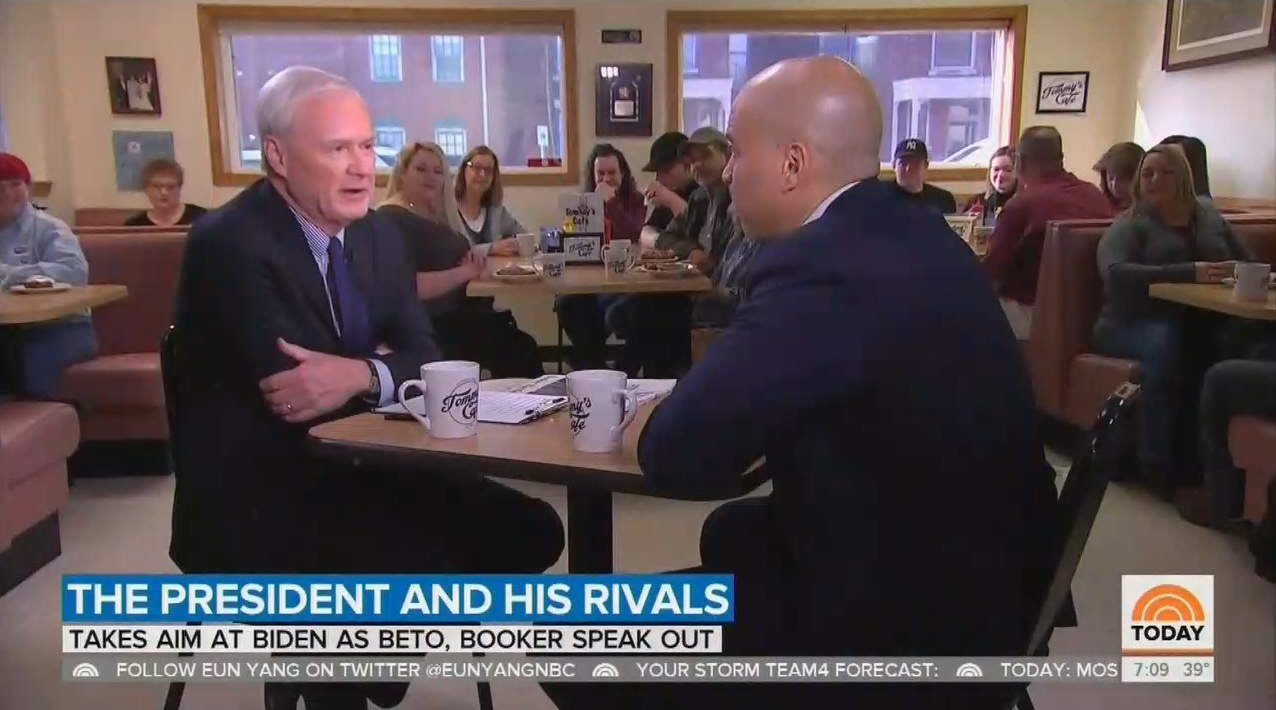 CHRIS MATTHEW: Is he racist?

MATTHEWS: Is he a racist?

KOTB: Alright, so back to the former Vice President for a second, Kristen. He’s been hinting about jumping into the race. Is he gonna make it official?

WELKER: Here’s what we know, Hoda. Biden has been telling friends that he’s all but certain to launch a third presidential bid. He and his team are eyeing a potential announcement in early to mid-April. Now, Biden has been huddling with advisers, even meeting with other tough Democrats like Stacy Abrams, remember she lost her bid for governor in Georgia, but she’s also considering her own potential presidential run.

For his part, President Trump will have a chance to weigh in on all of this when he holds a joint press conference with the President of Brazil, that’s later today. Hoda, Savannah?