Upset with prospective 2020 presidential candidates Howard Schultz and Michael Bloomberg blasting Senator Elizabeth Warren’s far-left proposal for a “wealth tax” on people’s assets, on Wednesday afternoon, MSNBC anchor Katy Tur complained that the billionaires “have more wealth and everybody else combined” with “almost no middle class any longer” in the U.S. At that point, Commentary Magazine Editor John Podhoretz tore apart her “crazy” assertion.

After Tur and left-wing pundit Zerlina Maxwell, SiriusXM’s Director of Progressive Programming, applauded the latest piece of Warren’s 2020 presidential campaign platform, Podhoretz pointed out how radical the idea was:

It is an expropriation money, money sitting in the bank, money that is, you know, calculated to be worth – or stocks or properties – that are calculated to be worth X hundred million dollars, and then you take two percent off the top of that....we have never in this country done anything remotely like it. We don’t do it because we tax earnings. We do not believe the government has the right to take/seize property from people simply because of the fact that they have more money.

Tur dismissed his objections as she made this stunning false claim: “You have people like Howard Schultz, Mike Bloomberg, Jeff Bezos, the list goes on, who make tons of money....you have this class of people who have more wealth and everybody else combined and almost no middle class any longer, and people who have no money whatsoever who are basically living on the poverty line.”

Attempting to explain away her faulty argument, Tur cited the government shutdown as evidence: “We just had a government shutdown where 800,000 federal workers were missing one or two paychecks and a number of them said that they were worried about paying groceries because they couldn’t –” Podhoretz interjected: “That doesn’t mean that they’re not the middle class.” Tur declared: “But living paycheck to paycheck is not middle class.”

Still baffled by her remarks, Podhoretz provided a fact check: “Sure it is....Middle class is an income level.” A 2016 Pew Research Center survey found that 52 percent of Americans met the income definition of "middle class."

Maxwell tried to rush to Tur’s defense: “Yes, but if wages are not growing and the cost of living is higher then certainly the income level that you’re talking about that used to be middle class is no longer that. You’re actually working poor.”

“That is just simply incorrect,” Podhoretz noted. Maxwell fretted, “If you are living paycheck to paycheck and you cannot buy food for your family, how is that middle class?” Podhoretz offered some facts: “The median income in this country has gone up $6,000 in the last two years from 47 to $53,000 a year.”

MSNBC hosts like Tur are so steeped in left-wing ideology that they are willing to completely abandon factual journalism in a desperate effort to boost liberal politicians and their dubious class-warfare politics.

Here are excerpts of the lengthy January 30 discussion:

MAXWELL: No, and I think that we have to have a more fulsome understanding of what tax rates are, marginal tax rates are. And you know, rich people complaining that you’re going to tax us higher, is no surprise. It is not a surprise that two billionaires have come out in opposition to a tax which would take more of their money. But I think, as people who live in a society where they aren’t the only ones here, you didn’t gain your wealth in a vacuum. And that’s actually something that Elizabeth Warren, unlike a lot of other Democrats, she’s made that case. You drove your trucks to deliver your products on roads that were build and, you know, kept up by citizens’ tax dollars.

TUR: And by the way, the infrastructure in this country gets a “D.”

TUR: A “D” according civil engineers.

MAXWELL: Right, we could improve on that.

JOHN PODHORETZ: Okay, but we’re not talking about a tax in the classic sense, which is a tax on earnings in a given year that you take a slice of.

TUR: It’s not an income tax.

MAXWELL: Right, I understand that.

PODHORETZ: We have never – one percent – we have never in this country done anything remotely like it. We don’t do it because we tax earnings. We do not believe the government has the right to take/seize property from people simply because of the fact that they have more money.

PODHORETZ: No, we do not. We tax people’s earnings in order that their annual incomes help defray the cost of the annual cost of the government.

TUR: Let’s also talk about where we are as a country today and the income inequality that’s being dealt with today. You have people like Howard Schultz, Mike Bloomberg, Jeff Bezos, the list goes on, who make tons of money on a yearly basis and then add exponentially to that within their personal accounts. And a lot of that money – not saying with those people – a lot of that money doesn’t stay in the U.S., it gets funneled off to various offshore accounts and they become tax havens. What you’ve seen as a result, partially at least, of that is you have this class of people who have more wealth and everybody else combined and almost no middle class any longer, and people who have no money whatsoever who are basically living on the poverty line. 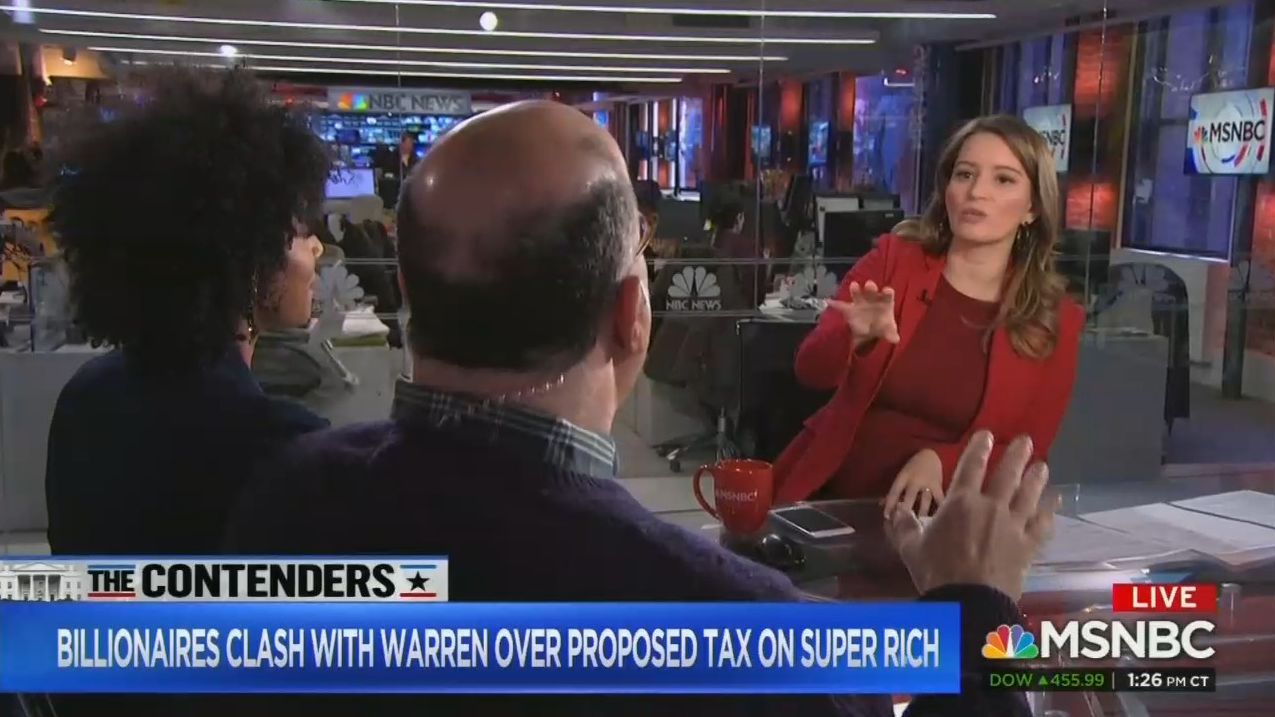 PODHORETZ: We have no middle class any longer?

TUR: We have a much smaller class than we historically used to.

PODHORETZ: No, we don’t. That’s actually not true. But in any case, what you’re talking about –

TUR: We just had a government shutdown where 800,000 federal workers were missing one or two paychecks and a number of them said that they were worried about paying groceries because they couldn’t –

PODHORETZ: That doesn’t mean that they’re not the middle class.

TUR: But living paycheck to paycheck is not middle class.

PODHORETZ: Sure it is.

MAXWELL: Yes, but if wages are not growing and the cost of living is higher...

PODHORETZ: I understand you guys want to –

MAXWELL...then certainly the income level that you’re talking about that used to be middle class is no longer that. You’re actually working poor.

MAXWELL: If you are living paycheck to paycheck and you cannot buy food for your family, how is that middle class?

MAXWELL: Not in the traditional sense.

MAXWELL: It won’t be that.

TUR: There’s rising income inequality. But my point is...

PODHORETZ: Rising income has nothing to do with whether there’s a middle class.

MAXWELL: Income inequality is not a partisan issue. The fact that people cannot buy food if they miss one paycheck is a result of the wild disconnect between the uber rich and people who are going to work everyday. And because Jeff Bezos won’t raise the wages on the people that are working for him and allowing him to have this great amount of wealth, I think that American citizens find that morally objectionable and are open to ideas that are different then the ones we have traditionally debated in this country.

PODHORETZ: I mean, they may be open to the ideas but everything you said there is disconnected from everything else. What does Jeff Bezos’ payment structure at Amazon have to do with 800,000 workers or whether or not people live paycheck to paycheck.

MAXWELL: I was using that as an example of the working class –

PODHORETZ: People have lived paycheck to paycheck throughout history.

MAXWELL: The reality of being in the working class, like employees of Amazon.

TUR: Hold, let me just give you a couple of numbers...

TUR: ...you were right, it was two percent over 50 million. I was wrong, my bad. Three percent on households with assets over one billion. This is Warren’s plan. It allegedly would raise $2.75 trillion over ten years and would draw 75,000 families – draw from only 75,000 families. That’s 0.1% of U.S. households.

PODHORETZ: Okay, so here is the problem with this. Even if you believe in it, history tells us that one thing –

MAXWELL: Believe in it?

PODHORETZ: No, even if you believe that this is a good policy or a good strategy, history tells us the numbers that you see there, that Emmanuel Saez and others came up with, the economists at Berkeley, the rich aren’t gonna pay that. You think – when the top tax rate in the United States was 91 percent, the rich paid 15 percent – you know, ended up paying a marginal tax rate of 15 percent.

TUR: So you’re saying that you just don’t tax the rich? What is your argument?

PODHORETZ: What I’m saying is if you have a sane – if you create a tax code in which the tax code seeks to essentially, you know, slice money off the ultra rich, they’re gonna find a way to get around it. So it is not –

MAXWELL: Why is that the way we are setting policy in this country? That makes no sense whatsoever.

MAXWELL: Because they can hire good accountants to avoid tax policy, we should not change the tax laws?

MAXWELL: That is crazy. That’s crazy. I can’t believe you just made that argument.

PODHORETZ: Okay, well, I don’t thin that you’re crazy, Zerlina, but the entire 1986 tax reform, bipartisan support, was about eliminating tax shelters and flattening the rates and lowering the rates so that the rich would pay more.