On Tuesday, MSNBC hosts and correspondents displayed their religious intolerance by attacking the faith of potential Supreme Court nominee Amy Coney Barrett. During one hour after another, Barrett’s membership in a faith group was ridiculed and listed as one of her “potential weaknesses” in a Senate confirmation fight.

“The private lobbying has ramped up in recent days, with some anti-abortion rights group favoring Amy Coney Barrett, from the 7th Circuit,” correspondent Peter Alexander noted on Morning Joe. He then warned: “A strong conservative, Barrett also has a pretty interesting bio. She’s Catholic, has seven children, and is a member of a small religious group called the People of Praise, where members swear a loyalty oath, what they call a covenant.”

The reporter cited a 2017 New York Times hit piece that highlighted how People of Praise members were “held accountable to a personal adviser, called a ‘head’ for men and a ‘handmaid’ for women.” Co-host Mika Brzezinski could be heard gasping in the background.

Moments later, Washington Post Associate Editor Eugene Robinson chuckled as he joined the morning show to take another jab at Judge Barrett: “Susan Collins, you know, for example on Barrett, she might have some problem with the ‘handmaid’ thing, right? Which I think a lot of people would have problems with.”

Amy Coney Barrett, you know, is somebody who is known to be deeply religious. She’s a Catholic. She belongs to a very small tight-knit group called People of Praise, that has received some scrutiny lately for some of its less orthodox beliefs.

Jansing eagerly asked: “Such as?” Peters replied: “Taking a lifetime loyalty oath to the organization and basically preaching an ideology that says the husband is the head of the wife in the family unit. You know, that’s all going to come out in way – ”

The anchor began laughing and interrupted: “Let’s see how that plays out when the wife is a Supreme Court justice.” Peters joined in the laughter and remarked: “Right, I know, exactly. It seems a little odd to me.”

Peters went on to explain the possible political strategy behind Republicans nominating Barrett:

Point being, that the Republicans are eager to make this a fight over a religious test. They want to make the Democrats look intolerant when it comes to people of faith and they would love nothing more than another moment like you saw in Coney Barrett’s confirmation hearing for the appeals court position, when Dianne Feinstein seemed to belittle her faith, saying, “The dogma runs deep in you.” 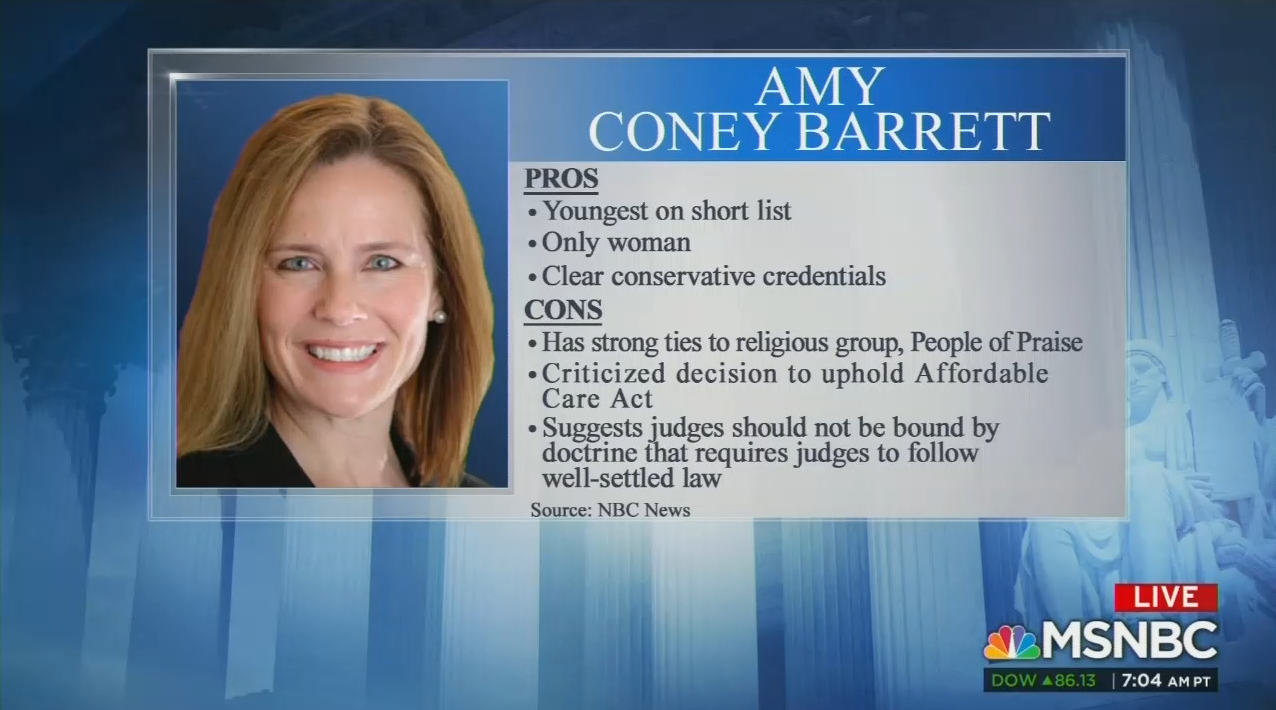 In the 10:00 a.m. ET hour, anchor Hallie Jackson listed Barrett’s faith as a “weakness” when it came to confirmation: “But, when you look at some of the potential weaknesses here. This People of Praise, reported ties that she has. An interesting religious group that, for example, labels heads of household, the men, the ‘heads,’ the women the ‘handmaidens,’ along those lines.”

Just prior to that, Politico Senior White House Reporter Josh Gerstein worried: “Amy Barrett would be among the more provocative possible nominees because of her skepticism about the Roe v. Wade decision is basically a matter of public record. So the White House would be making, I would say, a pretty edgy nomination if they go in that direction.”

Clearly MSNBC was making an effort to scare viewers by conjuring up an image of Barrett being a character in The Handmaid’s Tale, a fictional Hulu TV series in which America is taken over by an authoritarian theocratic regime.

On Monday, National Review’s David French took the left to task for its intolerance:

If you ever need much evidence that the growing “God gap” in American politics fosters an immense amount of ignorance and occasionally outright bigotry, look no farther than the concern — the alarm, even — that Amy Coney Barrett is on President Trump’s short list to replace Anthony Kennedy on the United States Supreme Court.

The alarm isn’t about her credentials. She’s checked every box of excellence — law review, appellate-court clerkship, Supreme Court clerkship (with Justice Scalia), elite law-firm experience, law professor at an elite law school, and now experience as a federal judge on the Seventh Circuit Court of Appeals. She’s a young, brilliant woman at the apex of her profession.

So, beyond her obvious originalist judicial philosophy (shared to varying degrees by every person on Trump’s list of potential nominees), what’s the problem with Judge Barrett. Why do some progressives single her out for particular scorn?

It turns out that she’s a faithful Christian who lives a Christian life very similar to the lives of millions upon millions of her fellow American believers.

French specifically ripped The New York Times for leading the attack, with its article that implied “there’s something not quite right with Barrett’s faith.” The Times published the item knowing full well that other media outlets like MSNBC would use those talking points to go after Barrett if she ever to found herself on the Supreme Court short list. It only took less than a year for that to happen.