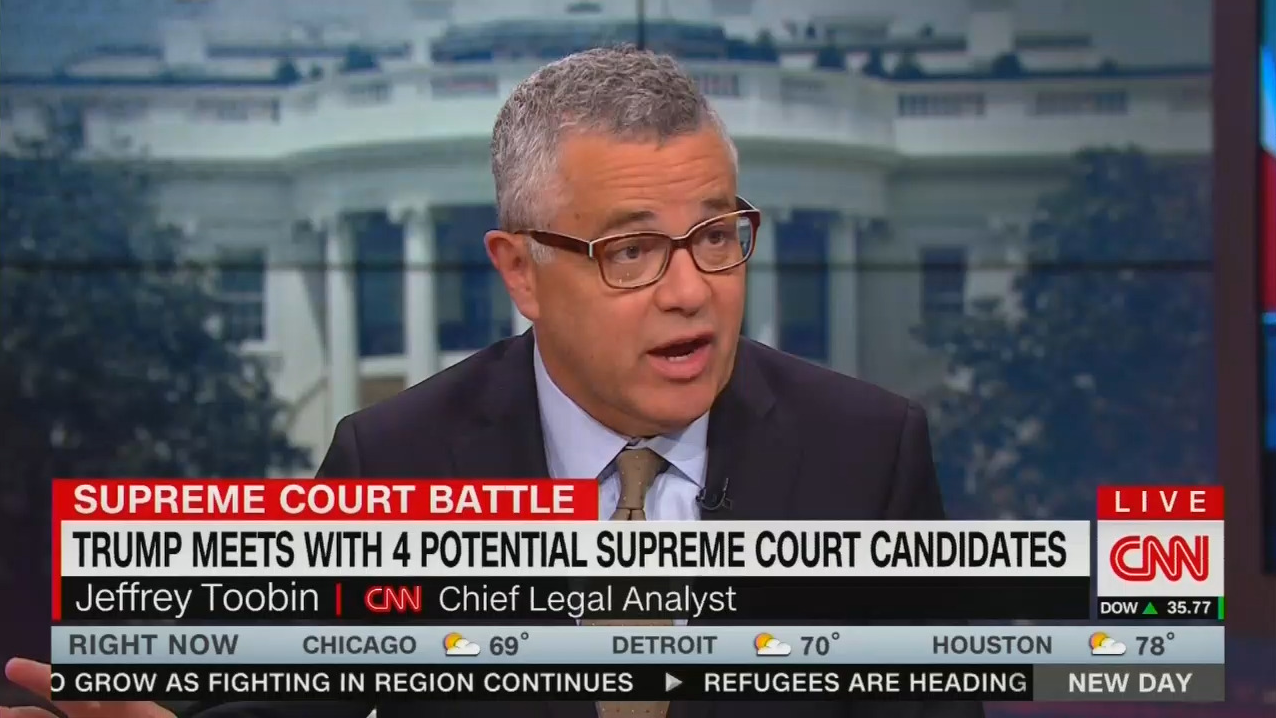 In a screed for the latest issue of The New Yorker, CNN Senior Legal Analyst Jeffrey Toobin warned the United States was doomed by prospect of President Trump naming another conservative justice to the Supreme Court. The cable news pundit feared that a “brazen conservative majority” would impact the country “in chilling new ways.”

“There is no mystery about Supreme Court Justice Anthony Kennedy’s favorite word. It is ‘dignity,’ which he invoked repeatedly in his opinions....So there is some irony in Kennedy’s decision, last week, to turn over his precious seat on the Supreme Court to the least dignified man ever to serve as President,” Toobin began his tirade.

The legal analyst wailed that Trump would succeed in appointing someone with the same ideological “extremism” as Justice Neil Gorsuch:

The whole purpose of Trump’s Supreme Court selection process has been to eliminate the possibility of nominating someone who might commit Kennedy’s perfidies of moderation. The activists from the Federalist Society and the Heritage Foundation who supplied the President’s list of twenty-five prospective nominees are determined to tear down the monuments, on select issues, that Kennedy has built. Their labors have already produced one soaring success, in the confirmation, last year, of Neil Gorsuch. His extremism has exceeded that of his predecessor Antonin Scalia and equalled that of his colleague Clarence Thomas, the Justice with whom he has voted most often.

Claiming that “it’s far from certain that the public wants the kinds of rulings that a brazen conservative majority would produce,” Toobin fretted that “the nominee and his or her supporters will avoid spelling out the implications of this judicial philosophy.” He predicted: “As with Gorsuch, the nominee will be supported with meaningless buzz phrases: he or she will be opposed to ‘legislating from the bench’ and in favor of ‘judicial restraint.’”

Due to this, Toobin argued that it was “all the more important, then, to articulate in plain English what, if such a nominee is confirmed, a new majority will do.” What followed was fearmongering at its worst, a litany of horribles that would befall the nation if a Trump court pick was confirmed:

It will overrule Roe v. Wade, allowing states to ban abortions and to criminally prosecute any physicians and nurses who perform them. It will allow shopkeepers, restaurateurs, and hotel owners to refuse service to gay customers on religious grounds. It will guarantee that fewer African-American and Latino students attend elite universities. It will approve laws designed to hinder voting rights. It will sanction execution by grotesque means. It will invoke the Second Amendment to prohibit states from engaging in gun control, including the regulation of machine guns and bump stocks.

During MSNBC’s 9:00 a.m. ET hour on Tuesday, fill-in anchor Chris Jansing eagerly recited that passage from Toobin’s unhinged diatribe. However, she at least suggested that it might a little overwrought: “Is that a little bit of hyperbole or, at least on the left, is that really the view of what’s to come?” New York Times reporter Jeremy Peters justified the liberal “panic”:

I think with Roe v. Wade on the line, you’re going to see Democratic groups, women’s groups, everybody from Emily’s List to the National Organization for Women to Planned Parenthood really galvanize because it’s real now. The idea that Roe v. Wade is one vote away from being struck down is going to send a panic into the liberal base.

Robert Bork’s America is a land in which women would be forced into back-alley abortions, blacks would sit at segregated lunch counters, rogue police could break down citizens’ doors in midnight raids, schoolchildren could not be taught about evolution, writers and artists would be censored at the whim of government, and the doors of the federal courts would be shut on the fingers of millions of citizens for whom the judiciary is often the only protector of the individual rights that are the heart of our democracy.

After Democrats defeated Bork, Kennedy satisfyingly patted himself on the back for his outlandish comments: “The statement had to be stark and direct so as to sound the alarm and hold people in their places until we could get material together. I was confident we could win this one.”

Wrapping up his own denunciation of a conservative high court, Toobin somberly concluded that “the Constitution grants only those rights that the Supreme Court says it grants, and a new majority can and will bestow those rights, and take them away, in chilling new ways.”

With Toobin’s radical left-wing views well known, CNN will now turn to him in the coming days to offer supposedly objective analysis of whoever Trump nominates to replace Justice Kennedy.