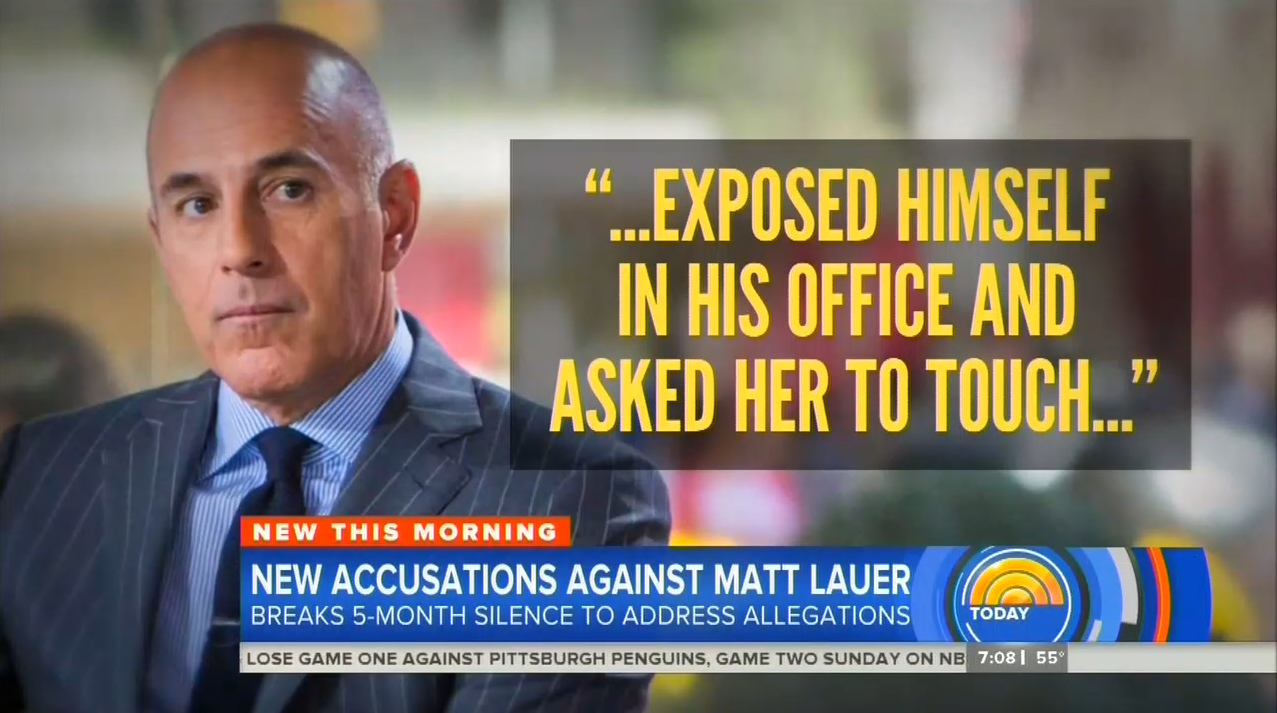 In a statement to The Washington Post on Thursday, disgraced former Today show anchor Matt Lauer bitterly went after his sexual harassment accusers, dismissing the “many false stories” about his behavior “from anonymous or biased sources.” The comments came amid a lengthy Post report on NBC’s poor handling of such allegations, which also detailed new accusations of harassment against former NBC Nightly News anchor Tom Brokaw.

“I fully acknowledge that I acted inappropriately as a husband, father and principal at NBC. However I want to make it perfectly clear that any allegations or reports of coercive, aggressive or abusive actions on my part, at any time, are absolutely false,” Lauer declared. In his first public statement after being fired from NBC in November, the morning show host was more apologetic, though still claimed: “Some of what is being said about me is untrue or mischaracterized.”

In addition to Lauer again speaking out publicly, the Post also spoke with former Today show anchor Ann Curry, who revealed that she reported Lauer’s behavior to NBC News management in 2012, five years before the network fired him:

During her last year on the “Today” show, in 2012, Lauer’s co-host Ann Curry said she approached two members of NBC’s management team after an NBC female staffer told her she was “sexually harassed physically” by Lauer. “A woman approached me and asked me tearfully if I could help her,” Curry recalled recently, in her first public comments about the episode. “She was afraid of losing her job. . . . I believed her.”

The woman, she said, implored Curry not to reveal her name to anyone, and she obliged. But Curry specifically named Lauer as a person of concern. “I told management they had a problem and they needed to keep an eye on him and how he deals with women,” she said.

During an interview with CBS This Morning in January, Curry described “a climate of verbal harassment” at NBC and noted that she was “not surprised” by the accusations against Lauer.

The Post story then proceeded to detail the latest sexual harassment allegations rocking NBC, against longtime anchor and now-special correspondent Tom Brokaw. Following up on former NBC correspondent Linda Vester telling Variety magazine that Brokaw groped and harassed her on two occasions in the 1990s, the paper explained:

Linda Vester, who began a promising career with NBC News in the early 1990s, can still recount alleged incidents with Tom Brokaw from nearly 25 years ago that anger her to this day. She said she did not report them to management out of fear of retribution. Even if such incidents are reported through internal channels, she told The Post, NBC is not willing to hire an outside arbiter.

“I am speaking out now because NBC has failed to hire outside counsel to investigate a genuine, long-standing problem of sexual misconduct in the news division,” said Vester, now 52.

The Post placed all of this in the context of “other missteps” by the network:

By the time Lauer was fired last year, NBC was already smarting from a series of missteps that have put it on the wrong end of some of the nation’s biggest news stories. NBC News held back the “Access Hollywood” video in which Donald Trump talks about groping women. (The video first appeared on the website of The Washington Post.) Similarly, NBC did not air Ronan Farrow’s investigation of Harvey Weinstein, which later ran as a bombshell in the New Yorker, accompanied by audio that had previously been in NBC News’s possession for months.

On Friday, all three network morning shows provided full reports on the Post and Variety scoops about Brokaw and Lauer, including the Today show. It was the second story on the NBC morning show, with correspondent Kate Snow telling viewers:

Overnight, allegations have surfaced against long-time NBC News anchor Tom Brokaw and our former colleague, Matt Lauer, as well. Both men refute the accusations that are being made against them. Meanwhile, another former NBC anchor, Ann Curry, is also speaking out, along with others, criticizing NBC News’s division – the NBC News division – for what they say is an atmosphere that enabled sexual misconduct and made it difficult to report.

Snow later concluded the segment by telling viewers: “NBC News says the internal review is being led by NBCUniversal’s general counsel. There’s also a culture assessment taking place with small dialogue groups across the network. And all employees, including myself, are receiving in-person workplace behavioral training.”