After all three network evening newscasts Wednesday night praised President Trump for repeatedly siding with Democrats on gun control measures during a White House meeting earlier in the day, on Thursday, CBS This Morning and ABC’s Good Morning America gushed over anti-gun Democratic Senator Dianne Feinstein “cheering” the President on during the gathering.

The CBS morning show played a clip of Trump calling on Senators Joe Manchin and Pat Toomey to allow Feinstein to add amendments to their 2013 gun control legislation, prompting an overjoyed reaction from the liberal lawmaker. Co-host John Dickerson proclaimed: “It was amazing to see Dianne Feinstein there, lifelong advocate for banning or limiting assault-style weapons, on the President’s side, cheering for the President.”

Co-host Gayle King hailed the President for scolding his fellow Republicans over their support for the National Rifle Association: “It was interesting for him to say, ‘They may have power over you guys. They don’t have power over me.’ I thought that was very interesting.”

On ABC’s GMA, correspondent Jon Karl declared: “As a candidate, Trump famously promised he would never let the NRA down. And while he once again praised them as ‘true patriots,’ he repeatedly took positions that put him at odds with both the NRA and Republican leaders in Congress.”

“[Trump] said one of the NRA’s top positions, allowing concealed weapons to be carried across state lines, was a no-go,” the reporter highlighted. Karl touted how “That got a fist bump from Senator Dianne Feinstein.”

Senator Feinstein apparently wasn’t the only one full of “glee” in response to President’s support for gun restrictions, journalists were equally delighted.

Here is a full transcript March 1 segment on CBS This Morning:

ALEX WAGNER: The President will host a White House meeting on school safety after calling for quick and substantial changes to federal gun laws. In a meeting with lawmakers carried on live TV, the President said he favors a comprehensive approach to gun control. Other Republicans are suggesting more narrow legislation. Mr. Trump dismissed NRA opposition to new gun laws and even called for a measure to let police take guns away from people considered dangerous.

WAGNER: The President said he will sign a bill if congress passes one, and made it clear he is open to compromise. 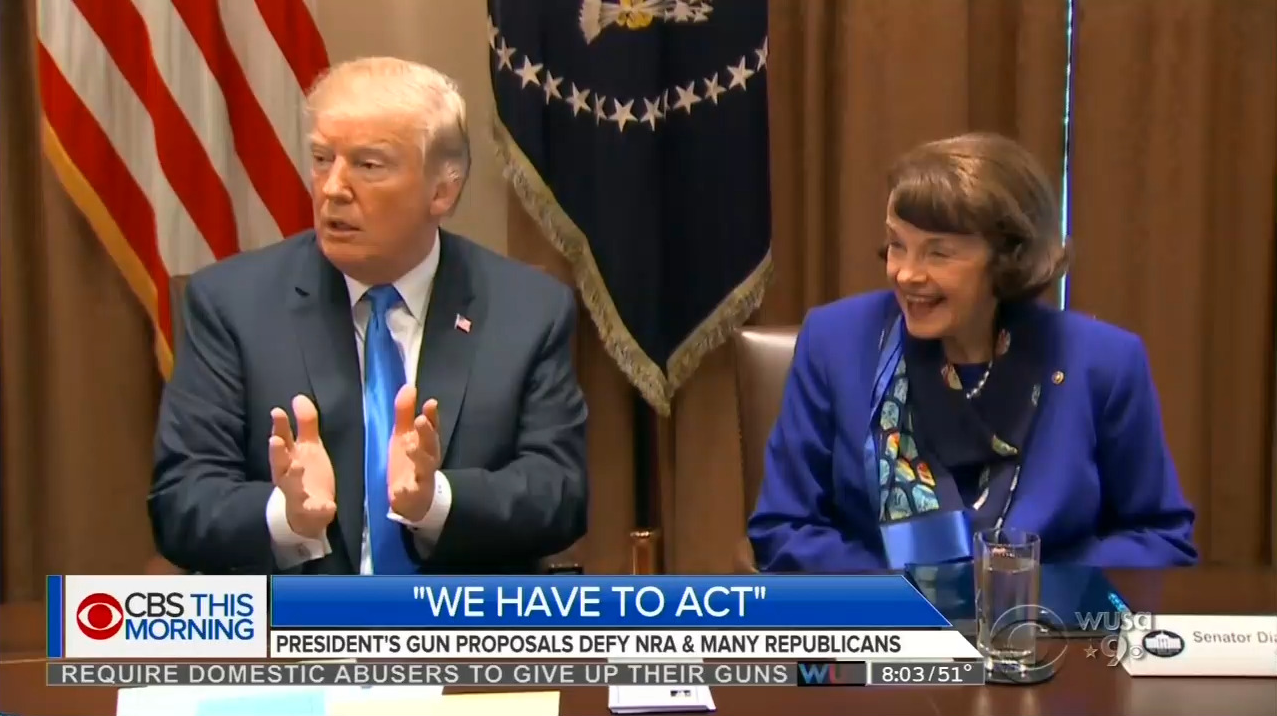 WAGNER: The President tweeted this morning that the meeting produced “Many ideas, some good & some not so good.” He also wrote, “After many years, a Bill should emerge. Respect 2nd Amendment.

JOHN DICKERSON: It was amazing to see Dianne Feinstein there, lifelong advocate for banning or limiting assault-style weapons, on the President’s side, cheering for the President.

WAGNER: Yeah, clapping her hands with glee. Yeah, you don’t see that often.

DICKERSON: Yeah, that’s not something you see, ever.

KING: I thought that was very interesting.