As they so often do, Wednesday’s network morning shows all read from the same script of liberal talking points as hosts and correspondents warned viewers that “ultra-conservative” candidate Roy Moore was a “staunch conservative” who won Alabama’s Senate primary despite his “extreme conservative views.” Did they mention he was “extremely conservative”?

Later in the report, he fretted:

A staunch conservative, Moore thinks America has lost its basic source of morality. He was twice removed from the bench for ignoring judicial orders, including not removing a Ten Commandments monument from a judicial building and refusing to issue marriage licenses for same-sex couples. He’s also said homosexual conduct should be illegal.

In the panel discussion that followed, Daily Beast Editor-in-Chief John Avlon sounded the alarm: “Roy Moore was a character who had been twice removed from the state supreme court, seen as extremely conservative on every issue...” Co-host George Stephanopoulos advised his fellow Democrats on how to use Moore to attack the GOP: “But you can imagine the Democrats are now gonna use Roy Moore in other races across the country.”

Correspondent Chip Reid began his report by using the word “conservative” three times in a matter of a few seconds: “But, of course, Alabama is one of the most conservative states in the nation. So even with his conservative, extreme conservative views, Roy Moore is favored to win.” The reporter then detailed the Senate nominee’s positions:

Tuesday morning, Moore arrived by horseback to cast his vote and waved his gun at campaign rally. But it's his extreme views that really set him apart....The judge has been removed from the bench twice, once just last year for rejecting federal orders on same-sex marriage. Moore even suggested that the 9/11 attacks were a punishment from God.

Finally, at the top of NBC’s Today, co-host Matt Lauer labeled Moore a “conservative firebrand,” followed minutes later by correspondent Kristen Welker describing the Republican as being “revered by social conservatives” and “no stranger to controversy.” Like her ABC and CBS colleagues she hyped:

Moore has called Islam a “false religion” and referred to homosexuality as “an inherent evil.” And was twice removed from the Alabama State Supreme Court, including most recently for refusing to enforce the U.S. Supreme Court’s decision to legalize same-sex marriage.

The biased coverage across all three networks was brought to viewers by Cheerios, IHOP, and Honda.

Here are excerpt from the September 27 morning shows: 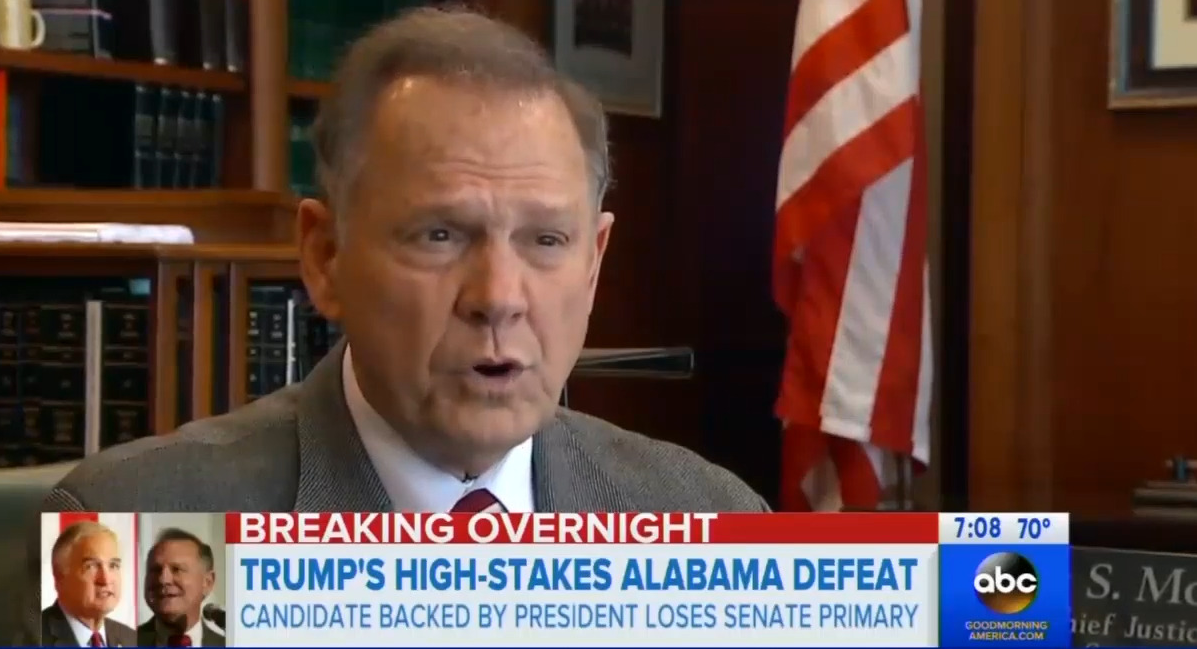 GEORGE STEPHANOPOULOS: Let’s bring in our Chief White House Correspondent Jon Karl and John Avlon, Editor-in-Chief of The Daily Beast. Jon Karl, let me begin with you. The President tweeting now is that he likes Roy Moore, said he talked to him last night. But this is really a double blow. On a single day he loses that primary, also loses the battle over health care.

JON KARL: The President’s also deleted several tweets where he was underlining his endorsement of Luther Strange. You’re exactly right, George, a double-barrel loss. And one thing in common with both of these big defeats for President Trump on the health care bill and in this Alabama Senate primary, in both cases he was following the lead of Republican Senate Leader Mitch McConnell. He was going with the Republican establishment. I think the lesson that the President’s gonna take out of this is that that’s not gonna happen anymore. I look for him to be further alienated and divided from that Republican establishment on Capitol Hill.

STEPHANOPOULOS: That’s the lesson the President is going to take. John Avlon, this is a blow to the entire Republican establishment. You’re likely to see more primary challengers now to entrenched Republicans.

JOHN AVLON: That’s exactly right. And Roy Moore was a character who had been twice removed from the state supreme court, seen as extremely conservative on every issue, and was rallied around by the base, opposed by the establishment. This is gonna cause more of a fissure. Yesterday we saw Bob Corker, respected Senator, decline to run for reelection, been threatened with a primary. So this is a sign of things to come. And I do think the point Jon Karl makes, that Trump got convinced to side with McConnell and the Republican establishment. He’s gonna go with his base, that civil war’s gonna continue.

STEPHANOPOULOS: Alabama is still a long shot for Democrats right now to win this race in December. But you can imagine the Democrats are now gonna use Roy Moore in other races across the country.

The Democrats are putting forward a former federal prosecutor named Doug Jones. Has an interesting record, helped prosecute or reignite the Birmingham bombings, to prosecute those finally. So somebody who’s a stronger candidate than you’d see in a deep-red state, but still a major road uphill. And the Democrats are going to be running against Roy Moore nationally. 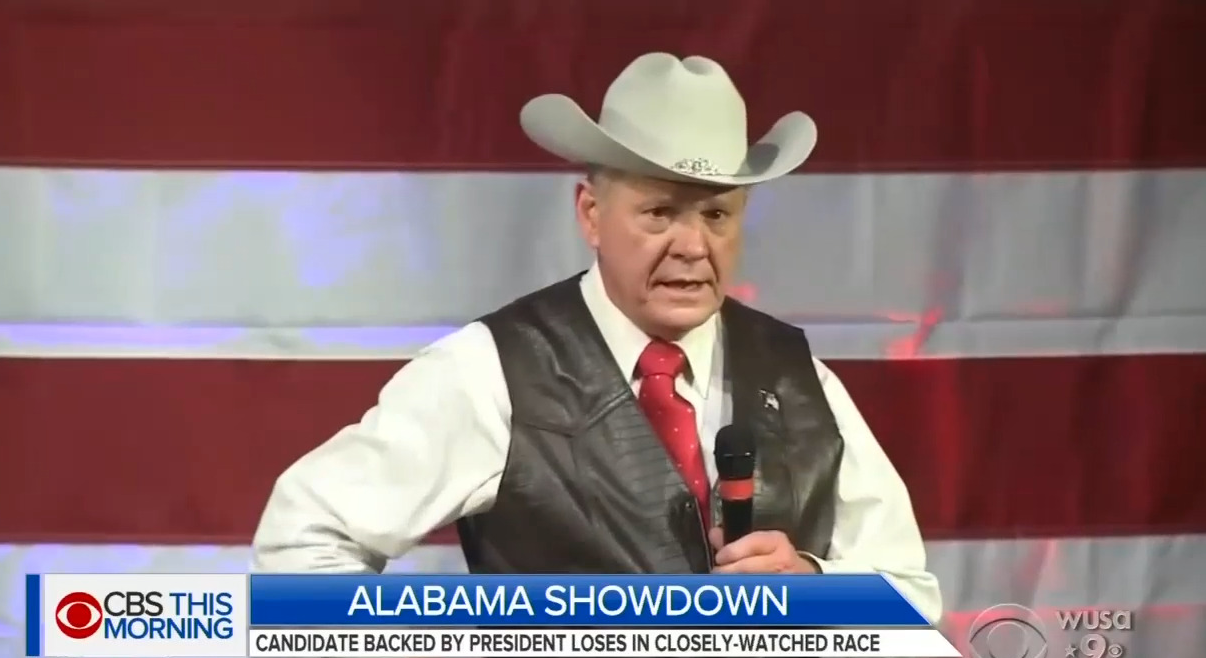 GAYLE KING: The President and GOP establishment suffered a severe setback in the U.S. Senate primary runoff in Alabama. Yesterday’s winner, Roy Moore, is a religious, right-wing favorite who was thrown off Alabama's Supreme Court twice. Moore defeated Luther Strange who was to replace Jeff Sessions. President Trump campaigned for Luther Strange but now he is backing Moore. He tweeted this morning, “Spoke to Roy Moore last night for the first time. He sounds like a really great guy who ran a fantastic race.” Chip Reid is in Montgomery, Alabama with more reactions to the results. Chip, good morning.

CHIP REID: Well, good morning. The race not over yet. Roy Moore will face off against Democrat Doug Jones in December. But, of course, Alabama is one of the most conservative states in the nation. So even with his conservative, extreme conservative views, Roy Moore is favored to win.

ROY MOORE: This is a time for victory.

REID: Last night, Roy Moore said it was God's will that he beat Senator Luther Strange to win the Republican nomination.

MOORE: We can support the President.

REID: Tuesday morning, Moore arrived by horseback to cast his vote and waved his gun at campaign rally. But it's his extreme views that really set him apart.

REID: The judge has been removed from the bench twice, once just last year for rejecting federal orders on same-sex marriage. Moore even suggested that the 9/11 attacks were a punishment from God.

MOORE: There are consequences when we turn away from the source of our strength. 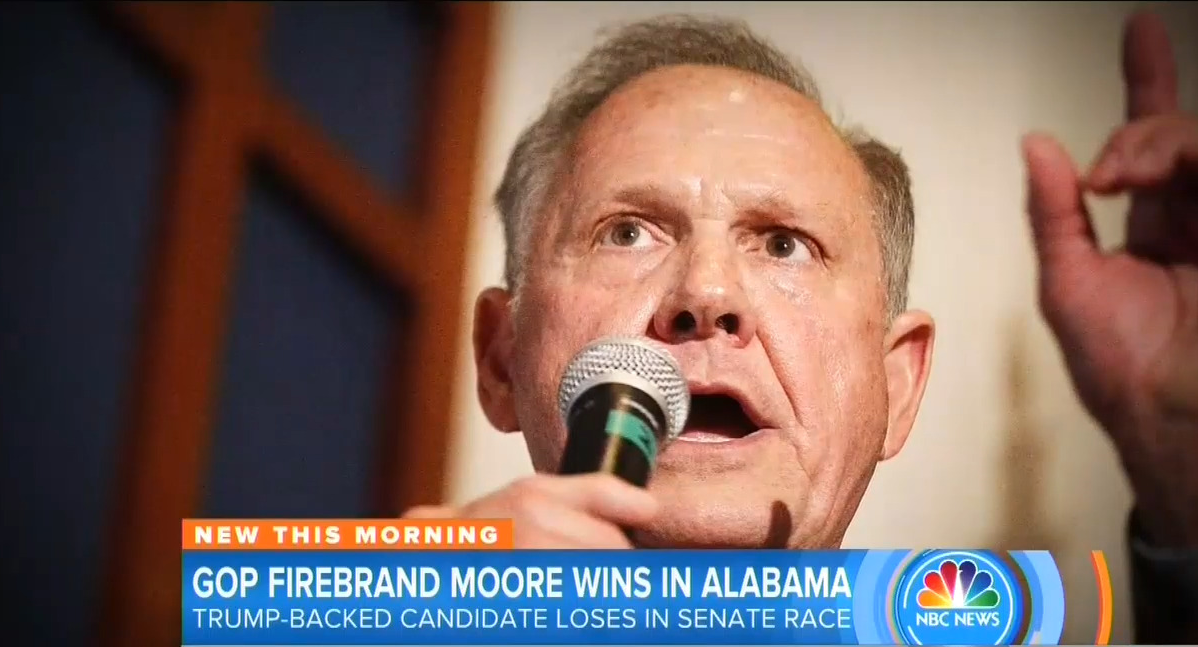 SAVANNAH GUTHRIE: Lots more to talk about this morning, including a big political defeat. The candidate that the President backed Alabama’s heated Senate primary race was soundly defeated overnight. NBC White House Correspondent Kristen Welker has the latest on that and more. Kristen, good morning.

KRISTEN WELKER: Savannah, good morning to you. President Trump will try to turn the page on that tough political night, unveiling his tax plan in Indiana later today. The President is looking for a much-needed political victory after major defeats on health care and for that candidate he supported in the Alabama Senate race to fill Jeff Sessions’s seat.

WELKER: The problem for the President? He campaigned for the establishment candidate, Luther Strange. The President quickly getting on board with the winner, tweeting, “Congratulations to Roy Moore on his Republican Primary win in Alabama. Luther Strange started way back & ran a good race.”

MOORE: Don’t let anybody in the press think that because he supported my opponent that I do not support him and support his agenda.

WELKER: Moore, revered by social conservatives, tried to rally his core supporters by brandishing a gun at his final campaign event Monday.

MOORE [HOLDING UP A GUN]: I believe in the Second Amendment.

WELKER: And he’s no stranger to controversy. Moore has called Islam a “false religion” and referred to homosexuality as “an inherent evil.” And was twice removed from the Alabama State Supreme Court, including most recently for refusing to enforce the U.S. Supreme Court’s decision to legalize same-sex marriage.