On Monday, NBC’s Today shamefully exploited the deaths of illegal immigrants smuggled into the U.S. to attack the Trump administration and Republicans in Congress. After reporting on how 39 people were found in the back of tractor trailer in San Antonio, Texas, nine of whom died due to the extreme 100-degree heat, correspondent Gabe Gutierrez declared: “Some blame the current political climate.”

A soundbite followed of left-wing illegal immigration activist Jonathan Ryan of the Refugee and Immigrant Center for Education and Legal Services, ranting: “The harsh rhetoric of today is exactly what is responsible for tragedies like what happened in San Antonio.” Gutierrez noted: “But human trafficking has been big business for decades....Last year, Homeland Security officials investigated more than 2,000 cases of human trafficking, making nearly 3,000 criminal arrests.”

Rather than rightfully point out the failures of the Obama administration to deal with illegal immigration, instead, a clip ran of Democratic Texas Congressman Joaquin Castro lecturing: “It’s a symptom of a broken immigration system which Congress has refused to fix.”

Wrapping up the segment, Gutierrez implored: “And as the immigration debate rages in this country, what happened in this parking lot is serving as a haunting reminder of what’s at stake.”

The biased coverage was brought to viewers by Ford, Toyota, and Citi.

Here is a full transcript of the July 24 report:

SAVANNAH GUTHRIE: A lot more happening this morning and federal charges are expected against the driver of a tractor trailer involved in a deadly and disturbing case of human smuggling in Texas. Dozens of undocumented immigrants were found inside the back of a sweltering 18-wheeler. NBC’s Gabe Gutierrez is in San Antonio for us with the latest on this. Gabe, good morning.

GABE GUTIERREZ: Savannah, good morning, it was a truly horrifying discovery, dozens of people crammed into a tractor trailer here in this parking lot, in the stifling Texas heat with no air conditioning. The suspected driver of that tractor trailer is now expected to be formally charged later today.

This morning, federal investigators are trying to unravel how a human smuggling operation inside this tractor trailer turned deadly.

UNIDENTIFIED MAN: Something like out of the movies, you don’t really expect to see that kind of thing around here.

GUTIERREZ: The gruesome scene, a sweltering Walmart parking lot in San Antonio, temperatures reached 101 degrees there on Saturday. Someone climbed out of the back of the tractor trailer parked near the store and begged for water. A Walmart employee called 911. Police found 39 suspected undocumented immigrants crammed inside. Eight were dead, another died at the hospital.

CHIEF CHARLES HOOD [SAN ANTONIO FIRE DEPARTMENT]: They were very hot to the touch, so these people were in that trailer without any signs of any type of water. 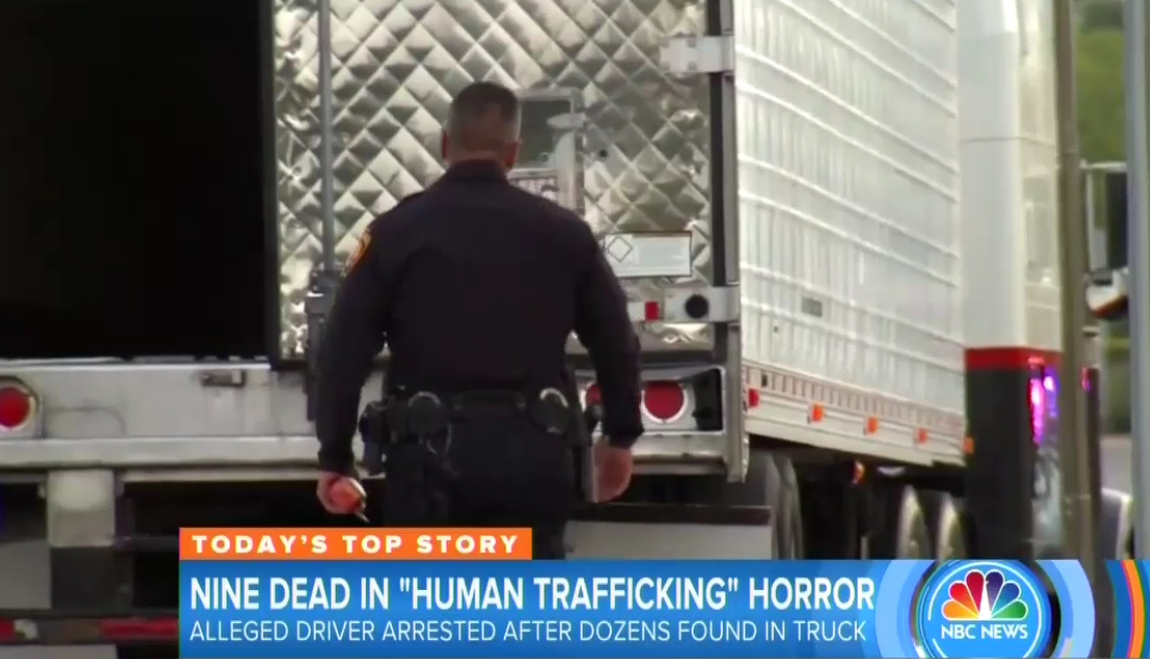 JONATHAN RYAN [IMMIGRATION ACTIVIST]: The harsh rhetoric of today is exactly what is responsible for tragedies like what happened in San Antonio.

GUTIERREZ: But human trafficking has been big business for decades. It’s eerily reminiscent of a 2003 smuggling case in Victoria, Texas, where more than 70 people were trapped in a semi-truck, 19 died. Last year, Homeland Security officials investigated more than 2,000 cases of human trafficking, making nearly 3,000 criminal arrests.

REP. JOAQUIN CASTRO [D-TX]: It’s a symptom of a broken immigration system which Congress has refused to fix.

GUTIERREZ: Late Sunday, a vigil for the victims.

GUTIERREZ: 30 undocumented immigrants, including teenagers, are now recovering at local hospitals. And as the immigration debate rages in this country, what happened in this parking lot is serving as a haunting reminder of what’s at stake. Savannah, Carson?