After Tuesday’s NBC Nightly News falsely tried to frame a New York City subway derailment as a sign of “America’s aging infrastructure,” Wednesday’s Today acknowledged that the accident was actually due to “human error.” However, that correction did not stop correspondent Thomas Roberts from using the incident to attack President Trump’s proposed budget that would reduce Transportation Department spending.

Roberts began the morning show segment by admitting: “...we did get new information overnight with the MTA confirming that this is an issue of human error. It’s not what was originally reported, to be something wrong with the infrastructure.” Despite that fact, he warned moments later: “But still, it’s the latest in a string of embarrassments to New York’s subway....And it’s a national problem. Earlier this month, President Trump gave a speech about infrastructure.”

Following a soundbite of the President calling for “a safe, reliable, and modern infrastructure,” Roberts scolded: “But President Trump’s proposed 2018 budget cuts funding to the Department of Transportation by nearly 13%, to $16.2 billion.” He conveniently left out the fact that Trump also called for a $1 trillion infrastructure package in his budget plan.

Here is a full transcript of the June 28 report:

MATT LAUER: In other news, we are learning more this morning about what caused a frightening subway train derailment right here in New York. Dozens of passengers were injured, service was disrupted for hours. The accident, the latest in a series of problems facing transit officials and frustrating riders. NBC’s Thomas Roberts has the latest on this. Thomas, good morning to you.

THOMAS ROBERTS: Matt, good morning to you. And the a.m. rush hour just getting started here. But we did get new information overnight with the MTA confirming that this is an issue of human error. It’s not what was originally reported, to be something wrong with the infrastructure. They use spare rail – for efficiency, stored down on the tracks so that they can repair them. But in this case, the spare rail wasn’t bolted down. It’s a nationwide practice. But that is not enough for millions of people who have to commute today who recognize that this is not a track defect.

UNIDENTIFIED WOMAN [NYC SUBWAY DISPATCH]: We have an emergency, stand by.

UNIDENTIFIED MAN [SUBWAY PASSENGER]: We were going up and down, all up the sides. People were flying all over the cars.

UNIDENTIFIED WOMAN B [SUBWAY PASSENGER]: It was just very traumatizing.

UNIDENTIFIED MAN B [SUBWAY PASSENGER]: We gotta go this way!

ROBERTS: The passenger who took this video said he thought he was going to die. These photos show the derailment’s damage. Twisted metal and debris, passengers taking pictures of a door ripped off their train car. Passengers shuffling out, car by car or dangerously walking along the tracks.

UNIDENTIFIED MAN C [SUBWAY PASSENGER]: The thing right there is the third rail.

ROBERTS: Until they made it safely to the platform.

ROBERTS: Overnight, the MTA said, “the cause was an improperly secured piece of replacement rail that was stored on the tracks; the cause appears to be human error, not a track defect.” 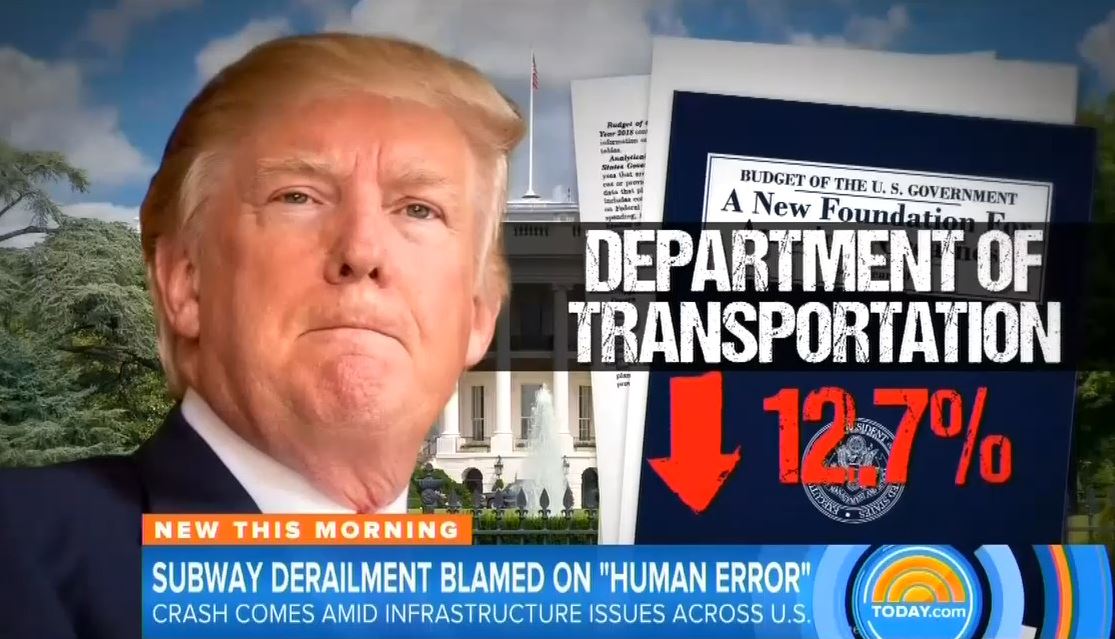 But still, it’s the latest in a string of embarrassments to New York’s subway. Earlier this month, passengers desperately tried to claw their way out of this dark and steamy F train after it was stuck underground for an hour after it lost power. “For F’s Sake,” the New York Post wrote, “Fix the Subways!” New Yorkers are already bracing for a so-called summer of hell for commuters. Amtrak racing to overhaul Penn Station after two derailments earlier this year.

And it’s a national problem. Earlier this month, President Trump gave a speech about infrastructure.

DONALD TRUMP [JUNE 7]: The promise of a safe, reliable, and modern infrastructure hasn’t been kept. But we’re going to keep it.

ROBERTS: But President Trump’s proposed 2018 budget cuts funding to the Department of Transportation by nearly 13%, to $16.2 billion. The American Society of Civil Engineers has slapped the U.S. transit system with a D-minus grade, noting there’s a $90 billion rehabilitation backlog.

So, work crews have been here overnight, trying to get everything back up and running for those that are commuting this morning. Three dozen people were injured in this accident, they are all expected to be okay.

Now one commuter I spoke to this morning, roughly around 6:30, she said she didn’t have any trouble getting here, Matt and Hoda, she was “in one, two, three,” she said. I also tried to speak to some of the MTA workers who were on a break. They were courteous, but said that they couldn’t give me a statement, they were going to be getting back to work.

But I think you can tell by the great weather – and Al and Dylan can confirm this – if you’re going to be a little late for work today, and it’s because of an issue with the subway, today’s a beautiful day to walk. So take that into account.