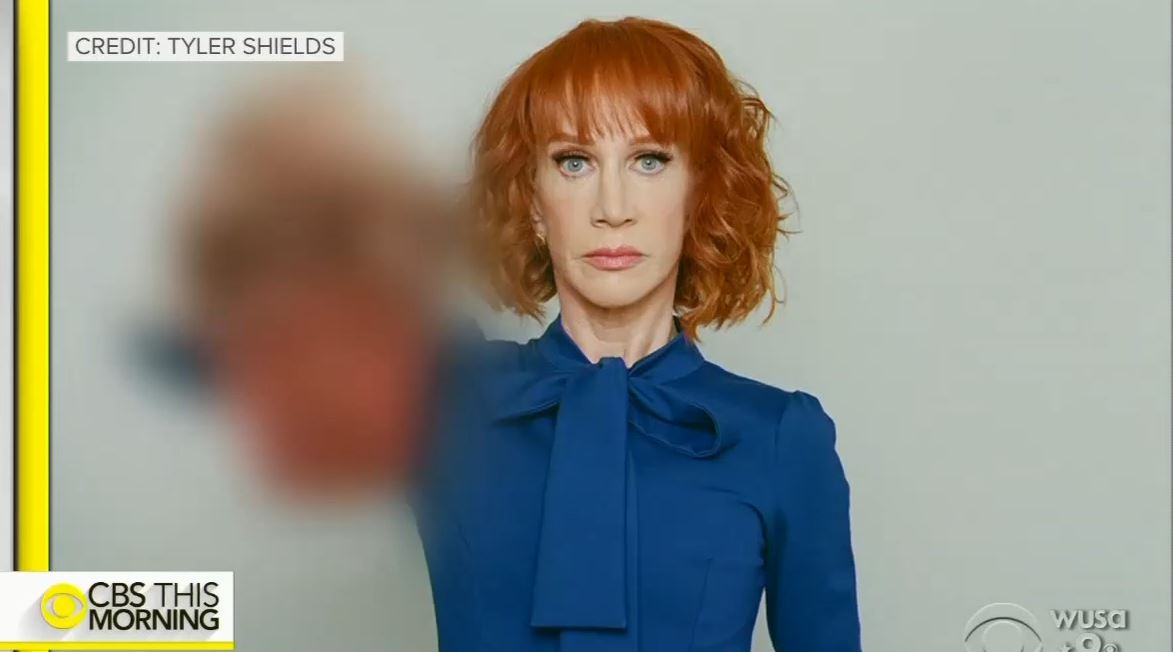 While NBC’s Today and ABC’s Good Morning America on Wednesday devoted full reports to comedian Kathy Griffin’s widely-condemned mock beheading of an effigy of President Trump, CBS This Morning could only afford a 36-second news brief on the topic. By contrast, when an Republican congressional staffer criticized the behavior of the Obama daughters at a White House event on her private Facebook page in 2014, the CBS morning show had no trouble devoting full coverage to the minor controversy.

At the top of the 7:30 a.m. ET half hour, co-host Gayle King rightfully informed viewers: “The Los Angeles Times reports on Kathy Griffin’s graphic photo shoot. It features the comedian holding a fake bloody head of President Trump. We blurred it because it is so disgusting.” Moments later she added: “A lot of people are talking about this because when you look at it – I thought it was stomach churning when I first saw it.” Fellow co-host Norah O’Donnell chimed in: “Not funny at all.”

Despite expressing their outrage and noting how “a lot of people are talking about this,” the hosts quickly moved on to the next story and never revisited the topic in the rest of the two-hour broadcast.

Back in 2014, when Capitol Hill staffer Elizabeth Lauten took to Facebook to share her thoughts on the dress and behavior of Malia and Sasha Obama at the annual White House turkey pardoning ceremony, the networks – CBS included – completely lost their minds. Multiple reports were aired on the subject in the first 24 hours.

At that time, King proclaimed:

A congressional aide is at the center another social media controversy. A lot of people want her fired for criticizing President Obama's daughters online. Bill Plante is at the White House with the backlash and an apology that some people say is too little too late for those comments....What really gets me is that this woman is a communications director. I think she might have missed a class or two.

O’Donnell lectured: “...this is just part of our coarsening dialogue about treating other people with respect.”

It will interesting to see whether CBS actually provides a full segment on Griffin at some point and whether the networks continue to update viewers on the story in the same obsessive manner they did with Lauten.

Here is a full transcript of the May 31 news brief on CBS This Morning:

GAYLE KING: The Los Angeles Times reports on Kathy Griffin’s graphic photo shoot. It features the comedian holding a fake bloody head of President Trump. We blurred it because it is so disgusting. This morning, Mr. Trump tweeted, “Kathy Griffin should be ashamed of herself. My children, especially my 11 year old son, Barron, are having a hard time with this. Sick!” Griffin went on to Twitter to apologize. She said she crossed a line and she admits that she went too far. A lot of people are talking about this because when you look at it – I thought it was stomach churning when I first saw it. Even Chelsea Clinton tweeted, saying, you know, threatening the life of a president is never funny.