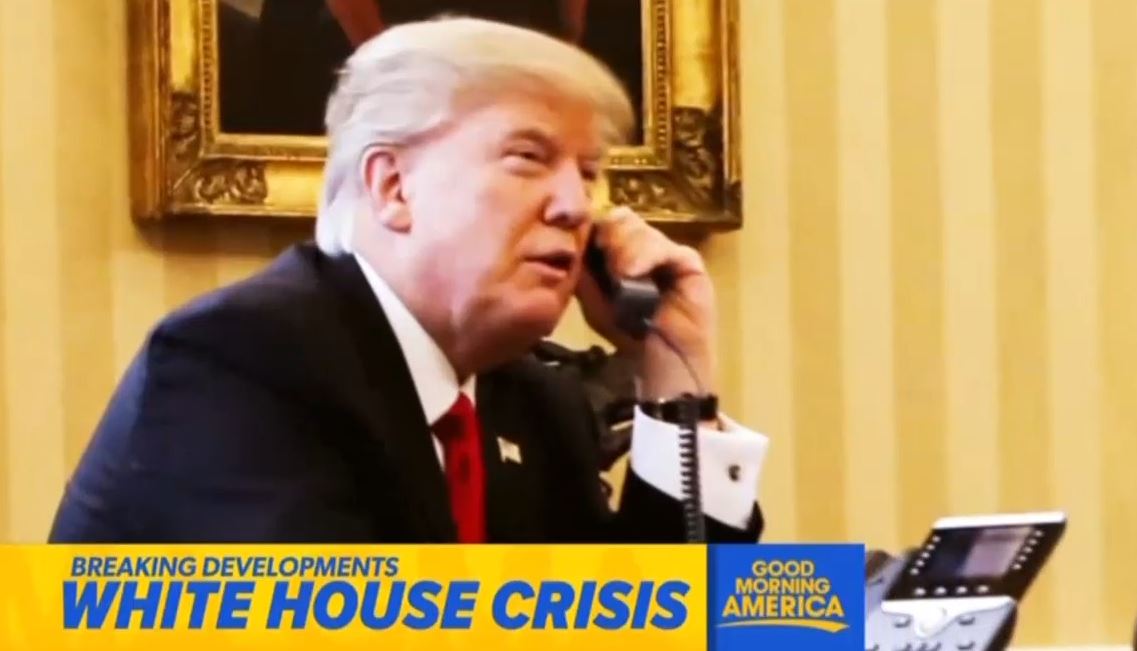 On Wednesday, the network morning shows declared a “White House in crisis” amid the fallout from the resignation of National Security Adviser Michael Flynn and a New York Times report on Trump campaign officials having contact with Russia during the presidential race. While those “bombshell” stories garnered 36 minutes 17 seconds of air time on the broadcasts, only a scant 2 minutes 2 seconds was featured on criticism of the serious national security leaks that fueled both stories.

Minutes later, during an interview with South Carolina Senator Lindsey Graham, Stephanopoulos noted: “The New York Times report is based on intercepted communications, they have – they quote four intelligence officials.”

In a discussion that followed, political analyst Matthew Dowd warned: “I think we are at a moment where Donald Trump's presidency is – we've already talked about his moral authority in this and the things that have gone on. He has to figure out how does he make a turn in this because otherwise it's going to deteriorate day to day.” Stephanopoulos interjected: “He doesn't seem to be ready to do that.”

Dowd complained: “No, his tweet this morning is basically accusing the media, it's their fault, it’s the leaker's fault, it’s somebody else's fault. As opposed to there is a command and control problem in the White House he has not dealt with.”

That five seconds referencing the President’s criticism of leaks was dwarfed by GMA’s 11 minutes 13 seconds of coverage devoted to the administration being “in crisis.” 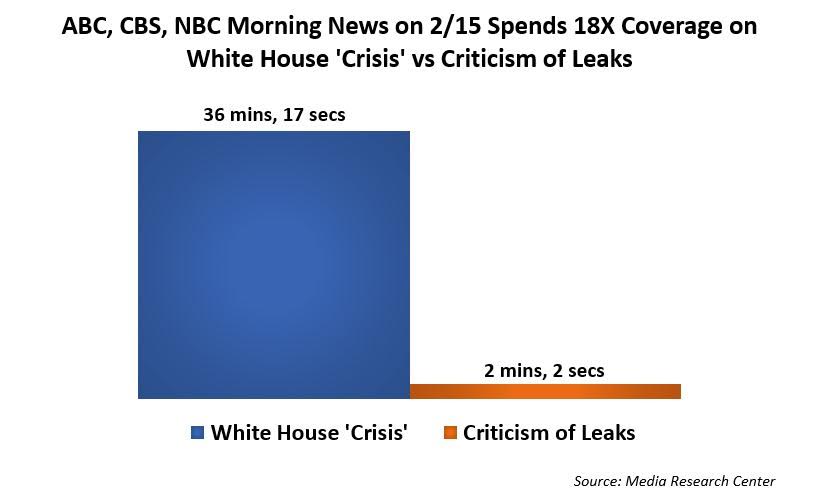 At the top of CBS This Morning, co-host Norah O’Donnell announced: “The Trump administration is in turmoil. A bombshell New York Times report claims members of the Trump campaign had repeated contacts with senior Russian intelligence officials before the election.” The headline on screen blared “Chaos and Confusion.” Moments later, O’Donnell added: “After just 27 days in office, the Trump administration, which promised change, has delivered chaos.”

In a report that followed, correspondent Nancy Cordes hyped the “spreading fallout” from Flynn’s departure and touted “Democrats renewed their calls, Tuesday, for a Watergate-style committee.” She only briefly mentioned concern over the leaks:

CORDES: Some Republicans argue the real problem isn’t Flynn, it’s the leaks about his phone calls.

SENATOR ROY BLUNT: We're concerned that any time intelligence is publicly talked about.

But the next track is what the administration does, not with regard to its own hiring, but also getting a handle on what appears to be, and I’m not absolving Flynn or anyone else of responsibility here, there seems to be a bureaucratic insurrection going on in the government writ large. These intercepts, these transcripts, when I was in government, I will tell you the notion that intercepts, transcripts of intercepts of conversations of private U.S. citizens, which Flynn was at the time, were treated with the utmost sensitivity. These now are being leaked. It could be episodic or it could be part of some campaign to isolate Flynn....The White house needs to get a hand will on the internal staffing issues, they need to get a hold of what is going on with the federal government writ large where this stuff is leaked out.

The CBS morning show devoted 14 minutes 36 seconds to the White House “turmoil,” with only 1 minute 2 seconds on the leaks.

On NBC’s Today, correspondent Hallie Jackson opened her report with: “This morning, we are learning a bit more about the timeline of who knew what when in this crisis over the national security advisor that has consumed the White House in the last 48 hours.” In a discussion that followed, MSNBC host Steve Kornacki wondered: “The question, though, is does this snowball? Is there enough curiosity provoked by this report today that other Republicans who have not previously been critical come out and say it is time for a bigger investigation on this?”

In a 7:30 a.m. ET news brief, fill-in co-host Sheinelle Jones noted the President’s reaction to the leaks: “Just this morning, President Trump is reacting on Twitter, calling the story ‘nonsense’ and claiming, ‘information is being illegally given to the failing New York Times and Washington Post by the intelligence community.’ He says, ‘NSA and FBI? Just like Russia.’”

During a report in the 8 a.m. ET hour, correspondent Peter Alexander quoted the same tweet and also made reference to Flynn making a similar statement: “In an interview with a conservative website hours before his resignation, a defiant Flynn insisted he ‘crossed no lines,’ instead blaming leaks to reporters based on classified information.”