Matt Lauer: 20 Years of Bias in the Morning 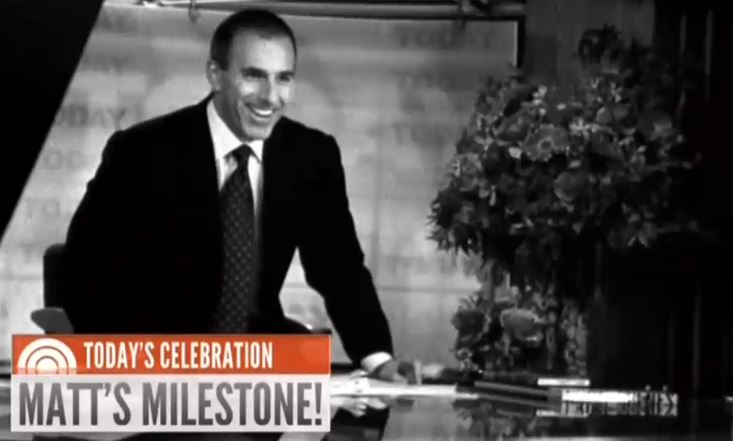 On Friday, NBC Today show co-host Matt Lauer celebrated his 20th anniversary anchoring the network morning show. Since joining the program on January 6, 1997, Lauer’s liberal bias has routinely seeped into his news coverage. From repeatedly excusing Bill Clinton’s sex scandals as mere “peccadillos” to bashing George W. Bush’s “controversial” presidency to gushing over Barack Obama as a “savior” for the country, his double-standard treatment for Democrats and Republicans has been clear. In addition, he more than once warned viewers that the end was near in his crusade to push the left’s climate change agenda.

After 20 years of waking up Americans with liberal talking points, here are 20 of Matt Lauer’s worst quotes:

“People have called you ‘The Savior,’ ‘The Messiah,’ ‘The Messenger of Change.’ The expectations have been raised to such a level....If you are, as you just say, lucky enough to be elected the next President, are you going to have to consciously manage expectations during the first several months of your administration?”
– Matt Lauer to Barack Obama on NBC’s Today, October 20, 2008.

"And more of our exclusive interview with the Speaker of House John Boehner. You know, he can invite anyone he wants to, to sit in his box to watch the State of the Union address. But in an effort to highlight a Washington D.C. scholarship program, he reserves the seats for inner city students....They're your guests. Could you blame them, though, if they're not a little mesmerized by Barack Obama tonight?....The nation's first African American president?...Is he, in your opinion, the most inspirational African American living right now?...You think that's the way these kids will feel when they watch?"
– Lauer to then-House Speaker John Boehner on Today, February 13, 2013.

Matt Lauer: “When you look at some of the things the Tea Party and others on the far right are asking for – no funding for Planned Parenthood, no funding for climate control, public broadcasting – does it seem to you, Senator, that this is less about a fiscal debate or an economic policy debate and they are making an ideological stand here?”
Democratic Senator Charles Schumer: “That’s exactly right, Matt. You’ve hit the nail on the head.”
– Exchange on Today, April 6, 2011.

"There’s been so much violence in the country in the last couple of weeks. People are on edge, they’re tense. You add to that the passion that comes with political debate and there are people who are truly afraid that things could boil over here in Cleveland. Would you be willing to make a pledge to speak to everyone involved in this convention and say, 'Please tone down the rhetoric'?... So can you say to the people who are going to take to that podium this week, 'No personal attacks, no vitriol, keep it civil'?"
– Lauer to Donald Trump on Today, July 19, 2016.

"As a daughter, Chelsea – I don't know where you were – but what was it like to sit and watch a television and hear people in an arena chanting 'lock her up,' hear Donald Trump say 'crooked Hillary'? How do you digest that?...I mean, it's clear, Chelsea, that Donald Trump is willing to bring up some of the darkest moments of your family's past as an issue. Would you sit down with Ivanka [Trump] and say that shouldn't fit into the rules of engagement?”
– Lauer to Chelsea Clinton on Today, July 28, 2016.

"In a recent interview, you said that the GOP civil war that we're all watching right now could lead to a real dissolution of the Republican Party as we know it. As a revolutionary on the other side, do you take some joy in that prospect?"
– Lauer to Bernie Sanders during Today town hall event, April 8, 2016. 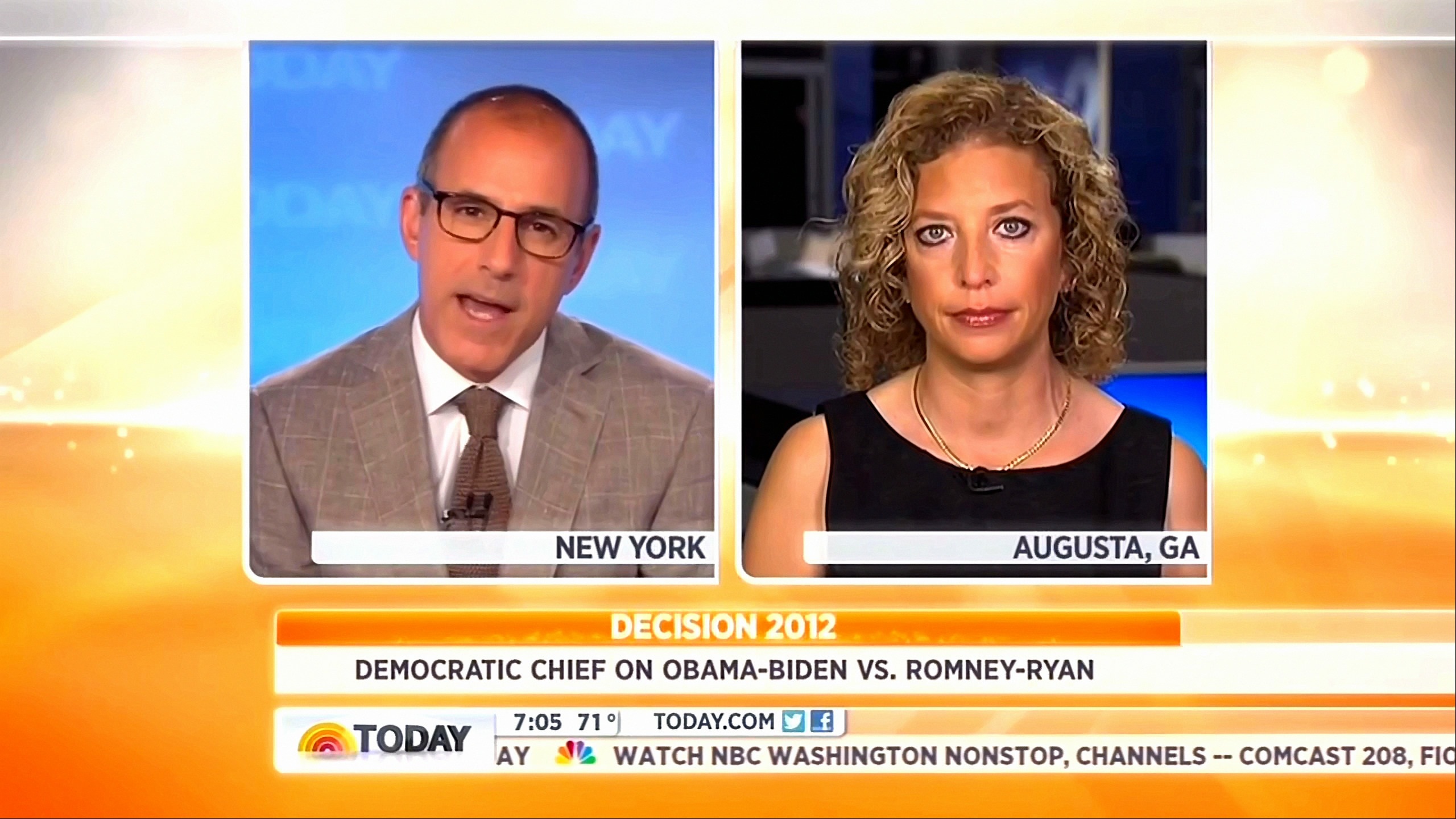 "Let me read you something Dan Balz wrote in The Washington Post recently. He said quote, 'There was no one on Romney's short list of contenders that they,' meaning the Obama campaign, 'wanted to run against more than the chairman of the House Budget Committee Paul Ryan.' Do you agree with that assessment? Do you think that Paul Ryan's addition to this ticket is the best thing that could happen to President Obama's chances for re-election?
– Lauer to then-DNC chair Debbie Wasserman-Schultz on Today, August 15, 2012.

"...[President Obama] firmly and pointedly chastised Governor Romney for politicizing a tragedy like this, a national tragedy. The father of Ambassador Stevens said, quote, 'It would be really abhorrent to make this into a campaign issue'....So I want your response, not to the President, but to the father of Ambassador Stevens."
– Lauer to then-vice presidential nominee Paul Ryan on Today, October 17, 2012.

Matt Lauer: “You admitted that there were these CIA secret facilities. Okay?”
President George W. Bush: “So what? Why is that not within the law?”
Lauer: “The head of Amnesty International says secret sites are against international law....Are you at all concerned that at some point, even if you get results, there is a blurring the lines of, between ourselves and the people we’re trying to protect us against?”
– Interview shown on Today, September 11, 2006.

"And there were so many key moments in your presidency that are captured in this center. So many difficult moments, so many controversial decisions you made. Some of them cost you dearly in terms of popularity. Is one of the ideas here, President Bush, to force your critics to take a second look?...We remember talking about the Supreme Court decision that resulted in your moving into the White House....the country was divided and there was so much controversy when you came to office....now we get into a wall here that says 'Fighting the Global War on Terror.' This, of course, includes the war in Afghanistan. And it includes what was perhaps the most controversial decision of your presidency, invading Iraq. And it became even more controversial after no stockpiles of weapons of mass destruction were found."
– Lauer to former President George W. Bush on Today, April 25, 2013.

Tried to Sow Dissension in the Ranks Under Bush...

Matt Lauer in Baghdad: “Talk to me...about morale here. We’ve heard so much about the insurgent attacks, so much about the uncertainty as to when you folks are going to get to go home. How would you describe morale?”
Chief Warrant Officer Randy Kirgiss: “In my unit morale is pretty good. Every day we go out and do our missions and people are ready to execute their missions. They’re excited to be here.”
Lauer: “How much does that uncertainty of [not] knowing how long you’re going to be here impact morale?”
Specialist Steven Chitterer: “Morale is always high. Soldiers know they have a mission. They like taking on new objectives and taking on the new challenges....”
Lauer: “Don’t get me wrong here, I think you are probably telling me the truth but a lot of people at home are wondering how that could be possible with the conditions you’re facing and with the attacks you’re facing. What would you say to those people who are doubtful that morale can be that high?”
Captain Sherman Powell: “Sir, if I got my news from the newspapers also, I’d be pretty depressed as well.”
– Exchange on Today, August 17, 2005.

...But Slammed ‘Dishonorable’ Criticism Under Obama

"As this criticism is leveled by you in the book of the commander-in-chief, the acting commander-in-chief, at a time when some 40,000 U.S. troops are in harm's way, do you think that by calling him into question at this stage it is either dangerous or dishonorable?"
– Lauer to former Defense Secretary Bob Gates on Today, January 13, 2014.

Despite the scandals and investigations, Bill Clinton was an incredibly popular President who connected with the American people....Under Clinton the economy boomed – deficits turned into surplus – and more than 22 million jobs were created. Along with the character flaws and the subpoenas came peace and prosperity.”
– Lauer summarizing Bill Clinton’s biography during the June 5, 2005 Discovery Channel special listing 25 finalists for the title of “Greatest American.”

Matt Lauer: “You talk about the loss of opportunity which frustrates Bill Clinton and also must frustrate the American people. So will the lesson that will be learned out of all this, Doris, be that maybe we go back to a time where we give less scrutiny to a President’s personal life, back to the Kennedy and Eisenhower and Roosevelt years?”
Historian Doris Kearns Goodwin: “....I hope that the media does go back to that earlier standard. I don’t want to talk about this. None of us do. Think about how much more exciting it would be if we were talking about civil rights, education, health care...”
Lauer: “Yeah, but I hope you’re right. I hope that the American people would find it more exciting to talk about health care and Social Security and not about these personal peccadilloes.”
– Lauer on May 23, 2000 Today.

“Based on your dreams for the information age, can you give me your reaction to the type of information we are hearing in the current situation between the President and Monica Lewinsky? Is that the way you envision the information age turning out?...But in this particular case, do you think it’s gotten to the point where possibly there is a chance that there is too much information on this particular subject?...As our partner I’m sure you watch our programming, you’re probably a news junkie like the rest of us. Do you think though that we as journalists have gone overboard on this story?”
– Lauer pressing Microsoft chief Bill Gates on Today, February 24, 1998.

Matt Lauer: “The book is called The World Without Us, and it asks the question what would happen to planet Earth if human beings were to suddenly disappear....And really it’s all about trying to figure out how long it would take nature to reclaim what we’ve created.”
Co-host Meredith Vieira: “The mess.”
Lauer: “How long it would take nature to fix the mess we’ve made?”
– Teasing upcoming segment on Today, September 4, 2007.

“A controversy in Washington over what literally could be the end of the world as we know it. Did the Bush administration freeze out scientists trying to sound the alarm on global warming?”
– Lauer on Today, January 31, 2007.

“Today, life on earth is disappearing faster than the days when dinosaurs breathed their last, but for a very different reason....Us homo sapiens  are turning out to be as destructive a force as any asteroid. Earth’s intricate web of ecosystems thrived for millions of years as natural paradises, until we came along, paved paradise, and put up a parking lot. Our assault on nature is killing off the very things we depend on for our own lives....The stark reality is that there are simply too many of us, and we consume way too much, especially here at home....It will take a massive global effort to make things right, but the solutions are not a secret: control population, recycle, reduce consumption, develop green technologies.”
– Lauer hosting Countdown to Doomsday, a 2-hour June 14, 2006 Sci-Fi Channel special.

"You know, after years of calling people's attention to this issue, and now we've seen Superstorm Sandy and tornadoes and drought and extreme temperatures, do you feel vindicated?"
– Lauer to former Vice President Al Gore on Today, January 29, 2013.

Mourning the Death of Communism

“Russia’s rush to capitalism left the vast majority scrambling to survive. For many, life is worse than it was in Soviet times.”
– Lauer in Moscow on the February 12, 2004 Today.