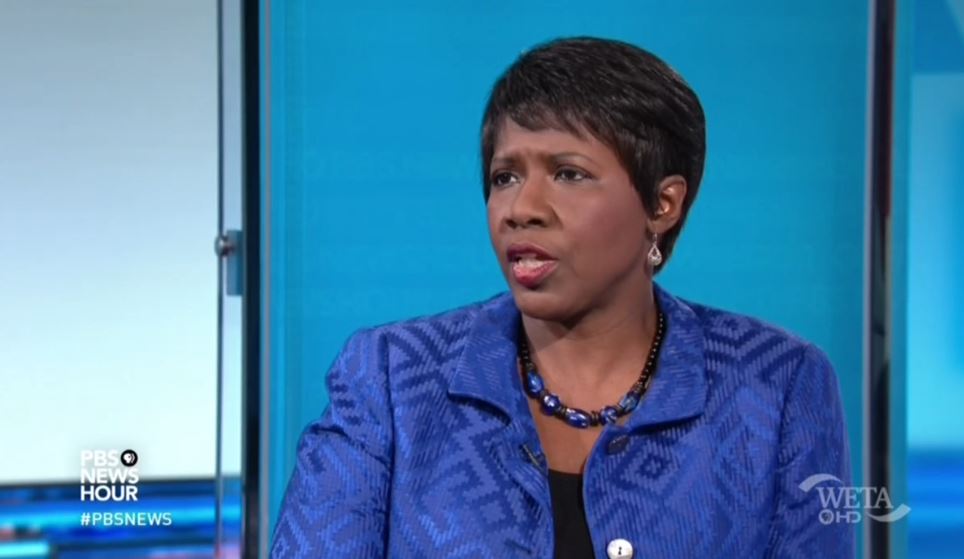 On Wednesday, Columbia University’s Journalism School announced that liberal PBS NewsHour anchor Gwen Ifill would be the recipient of the graduate program’s 2016 John Chancellor Award. The school’s dean, Steve Coll, laughably justified honoring Ifill for “her unflinching pursuit of the truth, healthy skepticism of those in power and her commitment to fairness.”

Reacting the to the announcement, the president and CEO of WETA Washington D.C. – the PBS affiliate Ifill broadcasts from – gushed: “Gwen is among our nation’s most accomplished, distinguished journalists, and her insightful reporting and news analysis are an extraordinary service to the American public.”

In reality, Ifill has a long history of liberal bias throughout her career at PBS. On numerous occasions she has been scolded by the network’s ombudsman for openly displaying her partisan political views:

> Just in June, PBS ombudsman Michael Getler admitted that it was “fair” to criticize Ifill for a town hall event she conducted with President Obama on June 1 in which she chastised the local community for not being enthusiastic enough in its support of the commander-in-chief. So much for that “healthy skepticism of those in power.”

> In September of 2016, Getler hammered Ifill over an “inexcusable” tweet she wrote mocking Israeli Prime Minister Benjamin Netanyahu’s opposition to the Iran nuclear deal. When news broke that the deal had survived a Senate veto, she ranted: “Take that, Bibi.”

> Back in 2012, Getler again took Ifill to task for emceeing an event honoring then-Health and Human Services Secretary Kathleen Sebelius for her implementation of ObamaCare, declaring: “...my vote would have been to bow out of this event.”

Despite such repeated offenses, Ifill still gets applauded by her liberal media colleagues for her “fairness.”