Lauer to Chelsea: Should ‘Darkest Moments’ of Clinton Past be Off Limits?

In a cozy interview with Chelsea Clinton, aired on Thursday’s NBC Today, about her mother’s upcoming speech at the Democratic National Convention,, co-host Matt Lauer fretted over Republican attacks on Hillary Clinton: “As a daughter, Chelsea...what was it like to sit and watch a television and hear people in an arena chanting ‘lock her up,’ hear Donald Trump say ‘crooked Hillary’? How do you digest that?”

In response, Clinton tried to deflect the criticism: “...as a mom, what I found so disturbing were things that were being said on a national stage [at the Republican National Convention]...about women, about minorities, about Muslims, about immigrants. I mean, that's not what I want my children to hear....And so, that actually I found far more upsetting....than anything they said about my mom.”

Lauer urged for a “summit” to pressure the Trump campaign to stop the rhetoric:

But I’m wondering if you can have an impact here as a daughter....You know Ivanka Trump, right? Would you consider her a friend?...Why not convene a summit? A children's summit. Maybe just a daughter summit. You and Ivanka sit down over a cup of coffee and discuss tone and discuss what it's like to hear those things coming out of the other candidate's mouth about the person you love.

He briefly acknowledged that Democrats were just as guilty of launching nasty attacks: “And by the way, this goes both ways. Your mom and her surrogates have been out there saying some pretty terrible things about Donald Trump, calling him a fraud and a bigot and things like that.”

However, Lauer made it clear that Trump was the person he was worried about: “I mean, it's clear, Chelsea, that Donald Trump is willing to bring up some of the darkest moments of your family's past as an issue. Would you sit down with Ivanka and say that shouldn't fit into the rules of engagement?” The host never explained what those "darkest moments" were.

At the start of the Republican National Convention, Lauer demanded Trump call on speakers to “tone down the rhetoric” but never fretted over the GOP nominee being upset by the things being said about him by Democrats.

Lauer imploring Chelsea Clinton to hold a “summit” to discuss the “tone” of the campaign sounded almost like he was giving an assignment to the former NBC News correspondent. In 2014, the network suffered criticism when it was revealed that Clinton was given a $600,000 salary for a handful stories over her brief two-year tenure at NBC from 2011 to 2013.

Here is a full transcript of Lauer’s interview with Clinton aired on July 28: 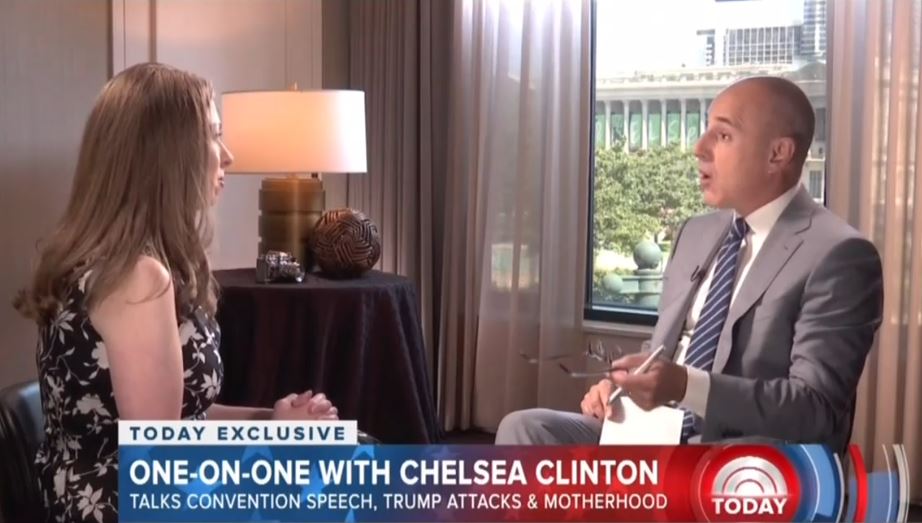 MATT LAUER: As we said, Hillary Clinton will address the convention tonight. It is her daughter Chelsea's job to introduce her. We spoke with her exclusively as she was putting the finishing touches on her speech and I started by asking Chelsea what it will feel like to watch her mother accept the Democratic nomination for president.

CLINTON: I just – I think my heart will burst. I mean, I – this election is so important to me because I’m now a mom. And as proud as I am of my mom, the election to me is fundamentally about my children, about Charlotte and Aiden, and I couldn't imagine a better president for them. I couldn't imagine a better grandmother for them either. And so, I think just standing there thinking about my children looking at my mom, I think it’s going to be overwhelming.

LAUER: You're going to set the table, in a way, for the most important speech of her life. What do you want to say about her? That people don't know, Chelsea, because your mom, your dad, your family, they've been in the public eye for decades. What don't we know?

CLINTON: Well, I hope to convey even just a small sense of why I am so proud and grateful to be her daughter. Why I'm grateful for the example she set for me as a mom. You know, I hope that people will just get a sense of why I'm so proud to be standing –

LAUER: So it’s going to be a deeply personal speech. This is not gonna be a speech that’s gonna try to separate her from Donald Trump?

CLINTON: No, I mean, I'm going to talk as her daughter. I'm an only child, so it’s a unique position that I have, and I just hope that people understand even a little more when I'm done than when I started about why I love her so much and admire her so much.

LAUER: You know your mom as well as anyone, and yet you hear the things that are said about her all the time. Lack of trust, people have very negative comments, her negative ratings are high. There has to be a disconnect in your mind between the person you know. How do you explain the disconnect?

LAUER: Coming up in our next half hour, we're going to have more of our conversation with Chelsea Clinton, including what she would say to Ivanka Trump about her father’s very personal attacks on the Clinton family.

SAVANNAH GUTHRIE: This is the fourth and final day of the convention and tonight’s theme is “Stronger Together.” The Clinton campaign says tonight’s message is supposed to reinforce the idea that America is at its best when Americans works together to solve problems.

MATT LAUER: The night’s highlight, Hillary Clinton will formally accept her party’s nomination for president. And as we mentioned earlier, she will be introduced by her daughter, Chelsea. We showed you part of our exclusive interview with her in our last half hour and Chelsea had more to say about the history that will be made in Philadelphia tonight.

UNIDENTIFIED MAN [1996 DNC]: For the current and next President of the United States, Bill Clinton!

BERNIE SANDERS: And I move that Hillary Clinton be selected as the nominee of the Democratic Party for president.

LAUER: You are breathing kind of rarefied air, you are the only person to have both of your parents receive the Democratic nomination for president. How do you put that in perspective?

CHELSEA CLINTON: Just with a lot of gratitude. I mean, I’m incredibly grateful to my parents for always believing in hard work and believing in never giving up. And also a lot of humility. So I certainly kind of feel it's important to me to support them, to respect this opportunity and this trust they've been given by Democrats and I certainly hope that my mom will prevail in November.

LAUER: As a daughter, Chelsea – I don't know where you were – but what was it like to sit and watch a television and hear people in an arena chanting "lock her up," hear Donald Trump say “crooked Hillary”? How do you digest that?

CLINTON: Well, you know, Matt, as proud as I am as a daughter, my most important identity now is as a mother. And so, you know, when I was kind of watching what was happening, what was being said in Cleveland last week, I just kept thinking about what my mom has said repeatedly when people have asked her similar questions. She says, you know, she's tough and she can take whatever people say about her.

LAUER: Yeah, but it's harder for a family member.

CLINTON: Well, but really, you know, as a mom, what I found so disturbing were things that were being said on a national stage, I mean, literally on the stage and off the stage around the convention, about women, about minorities, about Muslims, about immigrants. I mean, that's not what I want my children to hear. That's not representative of the country that I want my children to grow up in. And so, that actually I found far more upsetting as a mom, as a woman, as an American, and even as my mother's daughter, than anything they said about my mom.

LAUER: But I’m wondering if you can have an impact here as a daughter. And by the way, this goes both ways. Your mom and her surrogates have been out there saying some pretty terrible things about Donald Trump, calling him a fraud and a bigot and things like that. You're a daughter. You know Ivanka Trump, right? Would you consider her a friend?

LAUER: Why not convene a summit? A children's summit. Maybe just a daughter summit. You and Ivanka sit down over a cup of coffee and discuss tone and discuss what it's like to hear those things coming out of the other candidate's mouth about the person you love.

CLINTON: Well, it isn’t something that had occurred to me, but it's certainly something I would consider. I think it was clear last week when Ivanka introduced her dad that she's so proud of him. I hope it will be kind of at least as clear why I'm so proud of my mom when I introduce her here in Philadelphia. And yet, clearly Ivanka and I have very different views about who we think should be our president, who we think best represents our country.

LAUER: But you're both daughters. You both love these people. I mean, it's clear, Chelsea, that Donald Trump is willing to bring up some of the darkest moments of your family's past as an issue. Would you sit down with Ivanka and say that shouldn't fit into the rules of engagement?

CLINTON: Well, I don't expect her to always have to defend her father. I mean, I think it's clear that Mr. Trump is running his campaign and saying what he thinks is important in this election. I think what we're seeing here in Philadelphia is a very strong contrast to that. I mean, my mother is not engaging in divisive, bigoted rhetoric.

LAUER: Did you write your own speech?

CLINTON: So I wrote a draft and one of my mom’s terrific speechwriters, a woman named Megan, wrote a draft, and we’ve kind of melded them together. Another kind of working mom moment, yesterday I was breastfeeding Aiden and practicing with Megan and she was giving me feedback and I was exchanging ideas.

CLINTON: So even Aiden has contributed to the speech.

LAUER: There’s so much discussion about what your dad will be called if your mom becomes the next President of the United States. Have you talked about it at home?

CLINTON: Well, we have talked about it partly because we've all been asked about it so much.

CLINTON: Well, you know, he likes to harken back to his kind of Irish roots, so I think he’d love to be called “First laddie,” but –

LAUER: That’s probably not going to catch on.

CLINTON: No, I don’t think so. So I'm definitely voting for “First Gentleman.”

LAUER: I decided after only one day of “Matt Love,” I'm going now to “First Laddie.”

LAUER: It’ll be interesting to see how she does tonight. I don't think she loves the spotlight, so stepping on that stage is going to be a big deal for her.

GUTHRIE: Can you imagine the pressure for any of these children of political candidates?  Amazing to stand up and do it.